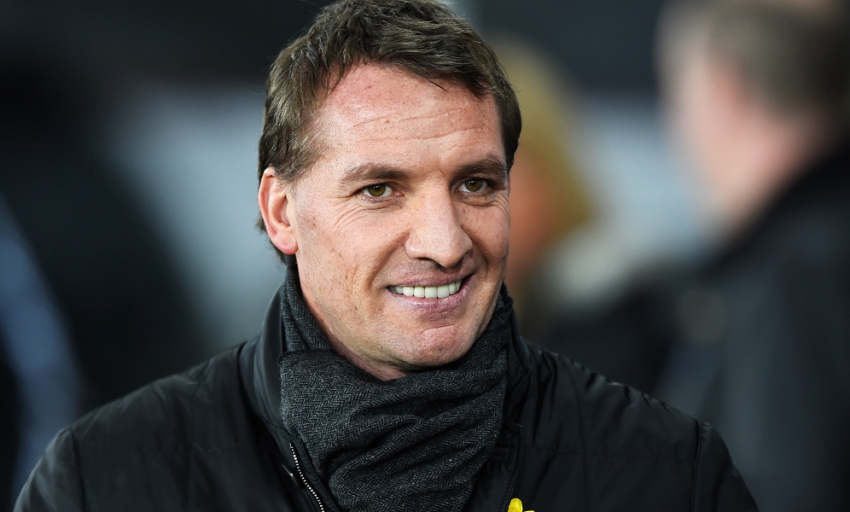 The Reds had been second best throughout the first half at the Liberty Stadium as Garry Monk's side prevented the visitors from establishing a rhythm.

It was a different story after the interval, however. Control was theirs, chances were being created and a fifth straight Barclays Premier League win was in reach.

Three points were indeed secured on 68 minutes when Jordan Henderson forced a fortunate strike that looped over Lukasz Fabianski to seal another success.

Rodgers said: "It was a wonderful demonstration of the character and resilience in the team, especially [after] how we played in the first half.

"Any system you play in the game doesn't work unless you have that ability to work, and we just weren't anywhere near it in the first half. But that resilience and character kept us in the game.

Expanding upon his analysis, the boss added: "People who know me and have watched my teams regularly from when I was a youth coach, my teams have played 4-3-3 and 4-4-2 diamond.

"If you look at Swansea tonight, they were a diamond and we were a box in midfield, and they got between us quite well I felt because they've got good players and they passed it well.

"We've prepared that in training for if we have to flip and you see the difference it can make. The players went smoothly into it.

"You push the sides further up, so it's a 3-4-3 but in a different format. We pushed Raheem [Sterling] higher up the pitch onto the full-back, [Alberto] Moreno went right high and then the diamond occupies the spaces in midfield.

"They play with two front players, but we still go three versus two at the back and then that allows us to have the extra numbers. It worked well for us."

A stubborn defensive display by Liverpool and several impressive saves by Simon Mignolet ensured a sixth consecutive clean sheet on the road in the Premier League.

That resolve at the back has been pivotal to the Reds' remarkable recent surge in form, which now stands at 13 games unbeaten in the division since mid-December.

"I'm proud whichever way [we win]," continued the Northern Irishman. "We work very hard first and foremost on how we defend.

"It's not just about the style, you have to have a foundation and the foundation for that is how we press the game.

"You can see whenever the team isn't quite pressing how we want then it becomes a little bit broken, like it was in the first half.

"We pressed the game and shortened the pitch much more in the second half. We got the goal and had opportunities to get a few more.

"We know that we have the capacity to win games. Our away record over the last two years is really strong.

"You see the resilience in the team and when we're not playing so well, we've still got that organisation and resolve to keep a clean sheet.

"In the second half we were much more fluent in our passing and movement. We played the most part of the game in their half. We didn't have too many scares in the second half.

"It's a great victory, it's a difficult place to come here and we're very happy."

Steven Gerrard was named on the substitutes' bench at Swansea, following more than a month on the sidelines with a hamstring problem suffered in February.

The captain was introduced to the action in the second period and placed in central midfield to add extra composure and a point of distribution in the chase for a winner.

Rodgers said: "What we did in the second half was run more without the ball, that notion for the team that you've got to move not just when you have the ball, you've got to run off it.

"We talked at half-time about penetrating and options for the guy in possession. Steven came on and offered that calmness.

"We switched to the diamond in the second half. He came in and fitted into the bottom of that. His calmness and control was very important in that."

Asked how the No.8's return to match fitness will be managed, the boss explained: "You have to pay respect to the team.

"They've been playing very, very well and getting results. Collectively over the last three months we've been in great form.

"But, of course, Steven has been out for a considerable period of time. He's fit [now] and you saw him in the game today how important he is when he came on."

It is now hugely congested at the top of the Premier League table.

The fifth-place Reds trail Manchester United by two points in the final Champions League qualification berth, while Arsenal and Manchester City are only three and four ahead respectively.

On Sunday, United travel to Anfield and Rodgers insisted his charges can approach a huge encounter with great confidence given the changes since their last meeting.

He said: "We can now really look forward to that. Tonight, whatever, we needed a result - so to get the victory was a huge result for us.

"At home, we look forward to going into this game - they're massive games, great games to be involved in.

"Hopefully, it'll show the strides we've made since we played them a number of months back. For that, I have to give immense credit to the team.

"We've put ourselves in a great position. There is still a lot of work to go so we'll recover now and get ready for the weekend.

"[The target is] to finish as high as we can. Everyone talks about fourth but it's the same every year for me. We do the best we can do.

"Manchester City's result at the weekend gives us an opportunity to finish second, so our mentality, the run and confidence we have at the moment we're just going to take that into every game and see where it takes us.

"We've clawed our way slowly back into it. We knew it was going to take time being so many points behind, but to get back to this level of consistency is very, very impressive.

"We've still got a lot of work to do, but we're on the right pathway."