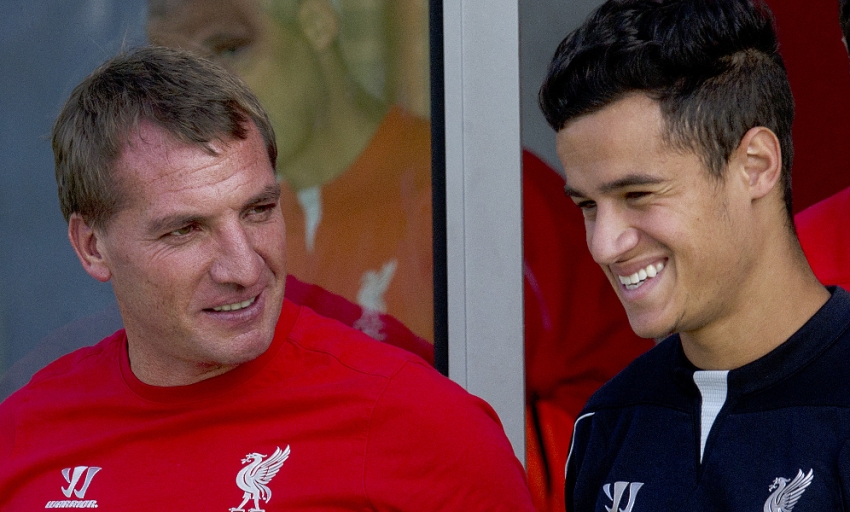 Brendan Rodgers today expressed his delight at the news that Philippe Coutinho has committed his future to Liverpool by signing a new long-term contract at the club.

The Brazilian put pen to paper on the deal at Melwood on Tuesday, three days after lighting up Anfield with a trademark, elusive display of skill to help the Reds sink West Ham United on Saturday.

Coutinho opened up the visitors by assisting both goals in the game, playing in Raheem Sterling for the first before rekindling his intuitive link-up with the returning Daniel Sturridge for 2-0.

It was the latest in a string of impressive performances from the midfielder, who has thrived as part of a liberated front three in recent weeks.

Rodgers insists Coutinho, who has delighted supporters with his displays this season, can improve further - and he's backed the playmaker to thrive in a key role for the club going forward.

"I'm delighted that Philippe has committed his long-term future to us; he is clearly going to be a big part of our story in the years to come," the manager told Liverpoolfc.com.

"The most exciting thing isn't just how good he is now, it's the further improvement he can make in his game. In terms of potential, he can still become even better.

"He deserves all the credit in the world for the attitude he has shown since coming to Liverpool. He arrived as a young man, in a country he'd never lived in before and joined a club where expectations are high. He has shown a willingness to listen, learn and improve."

Rodgers believes Coutinho, who arrived on Merseyside in January 2013, can act as an inspiration to the handful of youngsters at the club, as he singled out the No.10's personality and dedication to the cause for particular praise.

"He has shown resilience in adapting to the environment and has embraced everything we have asked of him," continued the boss.

"I love working with players like Philippe; he has an attitude to match his talent, but underlying all of that is a humble approach to his work and his life.

"It is my hope now that he continues with his improvement and development and becomes a figurehead for this exciting, vibrant, youthful squad of players, as we look to grow as a group and achieve success together."