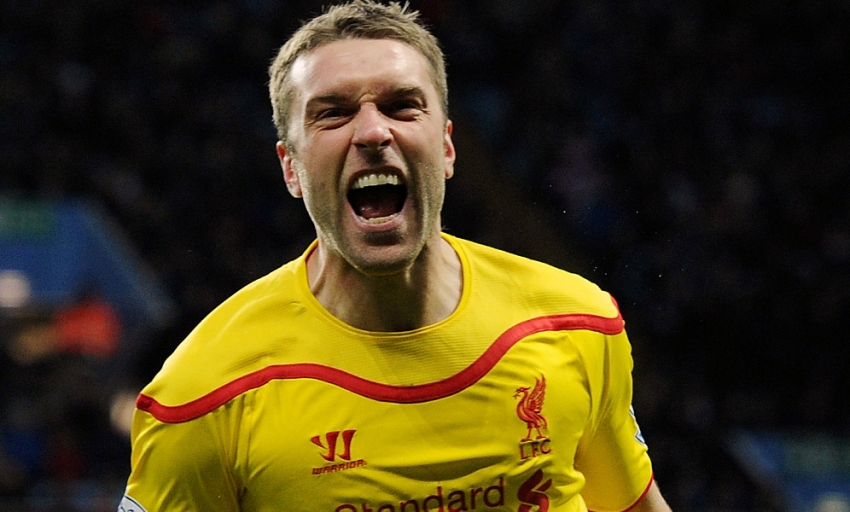 Rickie Lambert insists the chaotic celebrations prompted by his finish against Aston Villa on Saturday will live long in the memory.

It took the substitute all of eight minutes to score the goal which allayed any fears of a comeback from the home side, who had ratcheted up the pressure at Villa Park following Fabio Borini's opener in the game.

While the opposition threatened and their forward surges called for staunch defending from Simon Mignolet and his back three, Brendan Rodgers' Reds looked equally dangerous as they streamed goalwards on the counter-attack.

And when Raheem Sterling's pass found Lambert with little more than 10 minutes remaining, the forward kept his composure to drag a shot through the legs of Aly Cissokho and into the bottom corner of Brad Guzan's goal to seal a 2-0 victory.

The travelling supporters packed into the Doug Ellis Stand erupted with emotion and the levels of celebration reached fever pitch when Liverpool's players came sprinting towards them, with Lambert leading the pack.

"Running to the fans is [something] I will always remember," the No.9 told Liverpoolfc.com following the final whistle. "It was brilliant. Absolutely superb. It's brilliant to score a goal, but it's unbelievable to score for Liverpool.

"Raheem put me in, but I knew there was a player there, so I couldn't take it inside. Raheem was on the outside, which helped me put it through the defender's legs.

"To see it go in was brilliant. Obviously I want to affect the game and the best way to do that is to score the goal for my club.

"I thought our display was superb again. I think each week we're getting better and better and the momentum is building. Again, we definitely deserved the win.

"We didn't manage to get the second early in the game, which I think we deserved. Then there were a few shaky moments, but full credit has to go to the 'keeper today, Simon Mignolet. I thought he was superb."

Mignolet earned the Reds' seventh clean sheet of the season on Saturday -  and the highlight of his display arrived when the Belgian thwarted Christian Benteke with a brave block as his compatriot shaped to finish from close range.

"I think our attacking performance is getting better, but as we didn't manage to get the second [early on], when called upon, our defence, especially the 'keeper, was there for us," continued Lambert.

"Simon put his face on the line with Benteke's chance, which was an absolutely superb save. His face is okay now, but I think he'd take them all day, as long as he keeps the ball out of the net!"

While Lambert put the game beyond Villa with his 79th-minute strike, Borini gave the Reds a platform in the tie by latching onto Jordan Henderson's cross to clinch his first goal of the season midway through the first half.

"I was pleased for Fabio," said Lambert. "It was a great goal. He's done well. He was superb against Sunderland and he's done well today.

"He's played the role brilliantly and he's got his goal. It was a great ball by Hendo, and we deserved to go at least 1-0 up. It was a great performance from every player."