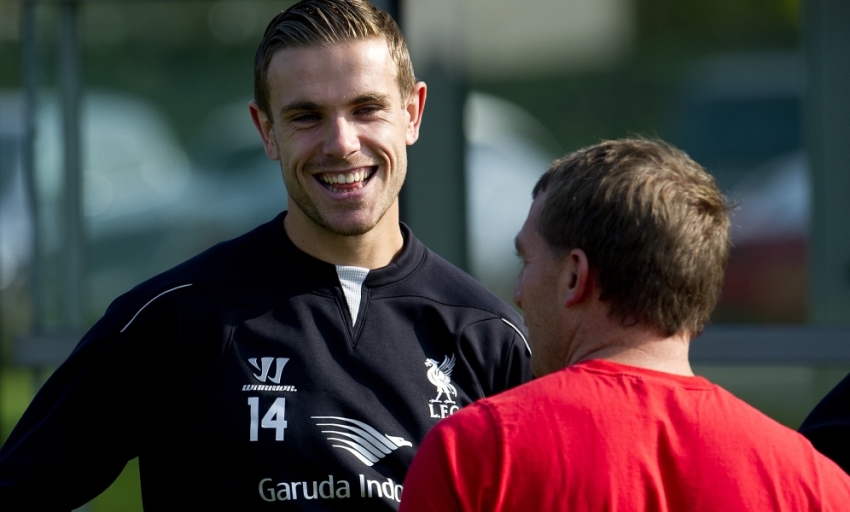 Aldo: The memories came flooding back

Brendan Rodgers believes Jordan Henderson has all the necessary attributes to be a leader at Liverpool when Steven Gerrard brings his momentous 17-year Anfield career to its conclusion in May.

Gerrard announced on Friday that the next five months will be his last for the Reds as the iconic captain will seek a new footballing adventure in the United States when the current season finishes.

Rodgers spoke at length on Saturday about Gerrard's supreme talents and his unbreakable bond to the club, which was forged long before the young Scouser made his debut for the first team in 1998.

But the manager was determined to look to the future, too, and insisted he will search for new leaders within his current squad, as he challenged his players to stand up and be counted.

Henderson, who was installed as vice-captain in September after completing a remarkable rise from the fringes of the team to the heart of the side, is one person in particular to whom Rodgers will turn.

And the Northern Irishman revealed that positioning the 24-year-old as understudy to Gerrard earlier this year was a move that was undertaken in order to help the No.14 develop his leadership skills further.

"It was one of the reasons I made him vice-captain," Rodgers told reporters gathered at Melwood. "I felt that he had no greater captain to learn from than Stevie.

"The idea of putting him in that role was for him to see Steven as a great example. In that vice-captain's role, it would give him pole position in terms of learning from a great - how Steven behaves and how he works, on and off the field.

"So when it came to the point that Steven would move on, we had someone there who, of course, is a different sort of player, but someone who can offer that wisdom and knowledge throughout his years here.

"That's something that I know he is very keen to do and something he has been doing, in learning from Steven."

He added: "The leadership has to come from within [the squad]. I felt that here, even when Steven was on the bench, at times the team are looking for that player, looking for Steven to come off the bench and come into the game.

"But this is an opportunity now for the players from within to really go and step forward. Come the end of the season, he won't be here, so it has to come from within - that's the reality of where we are at."

The manager also singled Raheem Sterling out for praise, pointing to the 20-year-old's recent success in scooping the European Golden Boy award as a sign of the Academy graduate's continuing rise to prominence within the game.

"We've got players here that are very keen and hungry to progress as footballers and as leaders," said Rodgers. "I see the likes of even young Raheem Sterling and his leadership qualities coming through.

"This is a kid who will go on and develop. He's won an award for being the top young European footballer of the last year. Over the coming years, you'll see him go on and become that world-class talent that is consistently performing.

"We've got enough leaders in that changing room that will now step up and grow, hopefully, and become that type of leader and that type of character that makes up successful teams."