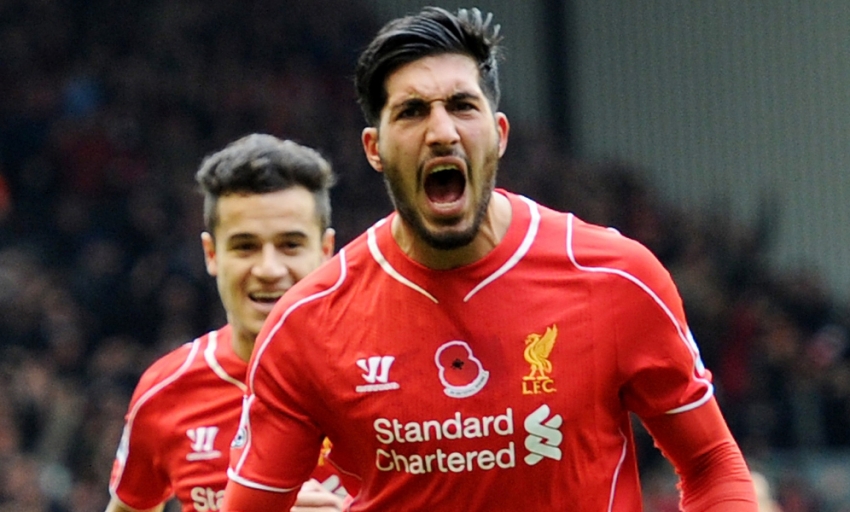 Adam Lallana believes Emre Can has all the raw qualities to be a star at Liverpool, and has thought as much about the German midfielder since the early days of pre-season training.

The former sustained a knee injury during the club's tour of the United States, meaning he was consigned to watch from the sidelines as the squad regrouped to prepare for the new campaign.

One of the players who impressed him, though, was the powerful Can, who Brendan Rodgers recruited from Bayer Leverkusen and who arrived around the same time as Lallana traded Southampton for Merseyside.

The 20-year-old has now made four starts for the Reds, firing his first goal against Chelsea at Anfield to break the deadlock on what was ultimately a day of disappointment for the home side earlier this month.

Lallana believes his teammate will take further strides over the coming weeks and build on his total of eight appearances for the club as the pair seek to get Liverpool's season back on track.

"I think Emre showed in the Chelsea game that one of his big qualities is driving forward with the ball and shooting," Lallana explained during the latest episode of #LFCWORLD.

"I remember in pre-season, when I was injured, I was out there and I was really impressed with him. He's still a lot younger than everyone probably thinks as well.

"He's a strong player, a good tackler, he's got a great engine. He can play a few positions as well, so he's going to be a great player for Liverpool moving forward."

Can showed his early potential in the youth leagues of Germany, playing first for SV Blau-Gelb Frankfurt and then Eintracht Frankfurt before Bayern Munich brought him to their Academy set-up in 2009.

In total, he made four appearances for the Bayern first team before opting for a switch to Leverkusen, where he worked under the guidance of former Liverpool defensive stalwart Sami Hyypia.

Lallana believes such a pedigree of Bundesliga experience has enriched the youngster's repertoire - and he chose to single out Can's positional versatility for further praise.

"He's played for Bayern Munich and he came from Bayer Leverkusen, so you don't play for two top teams and get Champions League experience as well [without being talented]," said the No.20.

"He's a top player. His versatility - he can play in defensive positions and I think he's played full-back at times as well. But he's more dominant in the central role.

"He's also a very unselfish player. He'll always put the team first. He'll sacrifice himself in terms of whether he's got to make a last-ditch tackle or help his teammate out. He also proved against Chelsea that he can go forward and nick a goal as well."