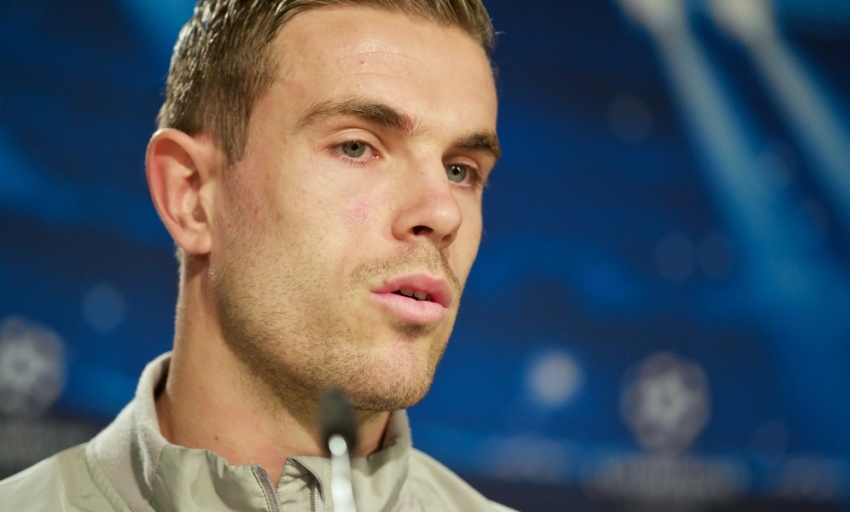 Courage and collective work, backed by the support of the Anfield crowd, are considered by Jordan Henderson to be the fundamental requirements for Liverpool to overcome Chelsea tomorrow.

The Reds welcome the early Barclays Premier League leaders to Merseyside for a lunchtime kick-off with a point to prove, having been beaten 1-0 consecutively by Newcastle United and Real Madrid in the past week.

A glance at the standings after 10 matches shows that Jose Mourinho's Londoners have racked up eight victories, two draws and zero defeats to establish a four-point advantage at the summit already.

Vice-captain Henderson is fully aware of the threat they'll pose, but he is not daunted. No, instead the midfielder sees the tools, know-how and mentality within the home ranks to end the aforementioned run if they reach maximum levels.

"We know it will be a difficult game because Chelsea are a top side, but I think we can still go into it with plenty of confidence," Liverpoolfc.com was told by the No.14, a goalscorer against these opponents in May 2012.

"It will be a big game for both teams and one that we're really looking forward to. It's a big opportunity for us to go out there and show how good we can be, especially against top opposition.

"You've got to make sure every single person is working as hard as possible, collectively as a team, and that we're defending very well. Also, creating opportunities in the final third, being brave to take someone on or get a shot off. If we do those things, we can get a good result.

"The crowd always play their part, it doesn't matter what game it is - they are always up for it and always cheering us on. With Chelsea coming to town, they'll be buzzing for the game and another big game for everyone. I'm sure the crowd can help us in that sense."

He continued: "I've been impressed with Chelsea this season. They have got some outstanding players but they are working well as a team, are defending very well and have scored some good goals. We know the quality they have got and it will be difficult.

"But we've got a lot of quality in the team as well so we've got to make sure we're working as hard as possible. We know the quality will come through in the end. We've just got to keep working in training, look forward and have a lot of belief in the game."

The midfielder was restricted to an observation post as Liverpool were on the wrong end of a 1-0 result against Real inside the imposing Santiago Bernabeu stadium in the Spanish capital, remaining on the substitutes' bench.

For Brendan Rodgers had decided to utilise the greater depth of his squad to make a number of alterations to the starting XI - a move understood by Henderson yet one he is determined to reverse in time for the visit of Chelsea.

"We've got a big squad and other people deserved to play," said the Englishman. "The Capital One Cup [tie with Swansea City] was probably one of the best performances, especially in the first half, of this season, in terms of keeping the ball, dominating possession and controlling the game.

"A lot of the players that played in that game deserved to play against Madrid. I was disappointed that I didn't have a part to play but hopefully I can have a good week's training and prove that I want to be back in the team for Chelsea."