Martin: It's time to reward your support

A group of ex-service personnel from the Liverpool FC Foundation's Military Veterans Programme will travel to RAF Lakenheath on Saturday to take part in the station's Remembrance weekend activities. 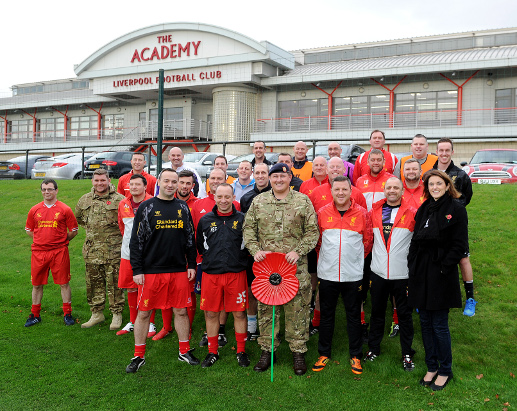 The Foundation veterans will stay at the base for two days to participate in their Remembrance weekend and WW1 centenary commemorations.

The Royal Air Force base in Suffolk, which is also home to United States Air Force units and personnel, will host an opening ceremony to officially welcome the veterans and LFC Foundation staff.

During their visit, the veterans will play an 11-a-side football match with the force's football team, which will be attended by US Air Force dignitaries and friends and family of the team's players. The group will also attend a special service, take part in a parade and lay a wreath to pay their respects.

Through a range of structured activities and projects, the programme helps to build confidence and self-belief and promotes health and wellbeing, education and re-employment opportunities, as well as providing a pathway to a various local specialist support services.

The programme has established a weekly football coaching session at the Liverpool FC Academy, a weekly five-a-side football league, competitive 11-a-side football matches with other veterans teams, all of which has resulted in over 3,000 participants benefiting from the programme's projects this year to date.

In May 2014, the programme sealed its commitment to the Armed Forces community by signing the Ministry of Defence Armed Forces Corporate Covenant and is only one of a handful of football club's to do so.

The Foundation also received recognition from the Prime Minister, David Cameron, for the programme in July and was invited to attend a special afternoon at No.10 Downing Street.

Mark Haig, head of Foundation operations, said: "It is a real honour for the Foundation to be invited to attend RAF Lakenheath and to have our programme and veterans recognised by the Force.

"It's testament to the work that the Foundation does to support ex-service personnel in the local community. The impact this programme has on individuals every week is immeasurable and part of the reason behind its successes to date."