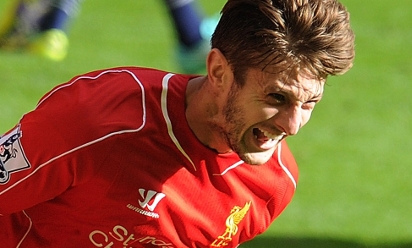 Your chance to quiz Thompson at Anfield

Liverpool may not have hit their peak performance level so far this season, but Adam Lallana believes the fact they're within touching distance of the top four says much about the mentality within the squad.

As they prepare to tackle Newcastle United this lunchtime, the Reds head into this weekend's latest round of fixtures just two points off fourth-placed West Ham United.

Lallana feels that owes much to a dressing-room resilience that can see Brendan Rodgers' side grind out results even when not at their best over the remainder of the campaign.

"All the top clubs have it," he explained to Liverpoolfc.com. "You can't always play well to win.

"Sometimes you have got to have an off day and still win - that's what the best teams do. Then when you play well, you're more likely than not to win.

"All good teams don't play well all of the time. We're in a bit of a transition period, there's no secret about that.

"We've got new players, a new system and people still adjusting. That's going to take some time, but we know we can improve sooner.

"You may not see us as the complete article just yet, but we're working hard to at least get results when we're not playing as well as we can. I think you've seen that on various occasions this season."

Liverpool will journey to St James' Park knowing they're set to take on a reviltised Newcastle outfit.

The Toon Army have collected three straight victories, having beaten Leicester City on home soil as well as turning over Tottenham Hotspur and Manchester City on the road.

"They picked up two great away results at Tottenham and Manchester City, but I've always found going up to St James' Park a tough game from my days at Southampton," said Lallana.

"I know the manager well from Southampton, so it'll be a difficult game but one we're looking forward to and hopefully we can get a good result."

Lallana's relationship with Alan Pardew stems back to their time together at Southampton.

The Newcastle boss is, therefore, acutely aware of the talents Liverpool's No.20 possesses and last season even admitted he was the type of player he 'feared'.

"I've got a good relationship with Alan," explained Lallana. "He was good for me in my early years at Southampton when I was 20/21. I played my first full season under him.

"It's nice to see them doing well because he was under a bit of pressure, so I'm happy they've picked up some good form. They've got a lot of new players in, but we'll definitely be looking to get the three points."

And what will be required to get those three points?

"I think we've got to be patient and disciplined," said Lallana. "We got a clean sheet against Hull and I think it's important we stay solid because we've got players in the team that are going to cause problems going forward and create chances, so that's important."