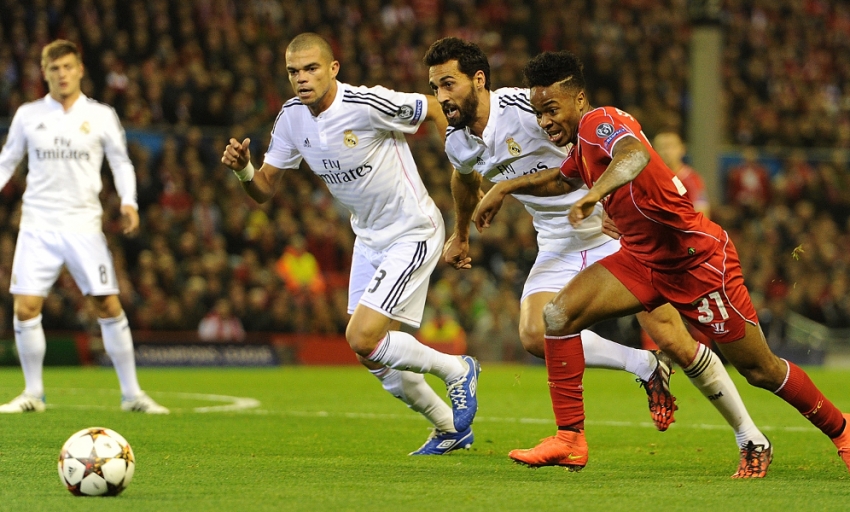 Liverpool endured the second defeat of their Champions League campaign on Wednesday night as holders Real Madrid came to Anfield and clinically claimed a 3-0 victory from the Group B encounter.

Despite a hugely encouraging start by the Reds, it was the La Liga outfit breaking the deadlock midway through the half via a Cristiano Ronaldo volley. That setback was compounded when, seven minutes later, Karim Benzema rose highest to plant a header home at the Anfield Road end.

The French international striker clipped in Madrid's third from close range just before half-time, leaving Brendan Rodgers' charges with a mountain that proved impossible to scale for the remainder of the tie.

Rodgers had opted for three alterations to the Liverpool XI that ultimately prevailed in dramatic circumstances at Queens Park Rangers last weekend - Joe Allen, Philippe Coutinho and Alberto Moreno received the nod for a position from the start.

As expected, and requested by the captain on the eve of the contest, the capacity crowd inside Anfield generated an atmosphere that was deafening, making the hairs on the back of the neck stand up and aiming to ruffle the star-studded Real contingent.

Initially, to a degree, it worked. Aside from a Ronaldo snapshot - the shuffle inside and drive from the edge of the area - that was comfortably close to Simon Mignolet, it was the home side with the self-created momentum behind them for much of the opening quarter-hour.

The intensity and energy of Rodgers' team was troubling the visitors, with each of their 11 starters under pressure every single time they took possession. There was little in the way of goalmouth action, however, and when a genuine chance did arrive, it was converted by the Spaniards.

Patient approach play on 23 minutes centred on James Rodriguez and Ronaldo took Real to the cusp of the Liverpool box and suddenly the tempo changed. The latter fed the former, ran in behind to collect the lofted return pass and adeptly looped a precise right-footer over Mignolet and into the net in the opposite direction.

The Portuguese soon swiped another hit from range wide to the right post, but by the half-hour mark Carlo Ancelotti's charges had found a second. After several attempts to find an incisive ball failed, Toni Kroos took control by sending in a cross from the left that was met by the head of Benzema and a conversion into the same corner.

Naturally shocked by the sudden double blow, the hosts tried to rally, but the scenario forming allowed Madrid to wait and seek to strike again on the counter-attack. Yet it was a set-piece that brought their third in the 41st minute - a goalmouth scramble ensued from a corner and once centre-back Pepe's strength had kept the move alive, Benzema tapped in a loose bobble.

Still the Reds battled back and Allen was mere inches the wrong side of the left post with a thrash from Mario Balotelli's cutback and Coutinho launched a sensational 30-yard blast that thundered back off Iker Casillas' goalframe seconds before the interval.

When the Reds returned for the second period, Rodgers introduced Adam Lallana for Balotelli, with Raheem Sterling moving into a more central attacking role. The cat and mouse routine continued, with Liverpool eager to reduce their deficit and the travellers happy to target the free space thus created.

Mignolet was called into action twice in quick succession past the hour mark, firstly punching out a Ronaldo piledriver from a narrow angle on the left. The No.7 then seized on a Benzema tee-up and looked a certain scorer yards out, but the goalkeeper's right leg prevented a fourth.

Emre Can and Lazar Markovic joined proceedings in a double switch for Jordan Henderson and Coutinho respectively. Sterling, ever lively and always a threat, worked Casillas by digging out a shot that the stopper needed to tip safely over the crossbar.

Rodriguez directed a promising opportunity off target to the right in front of the Kop after a nimble combination with Benzema, while Mignolet scooped up simply when Luka Modric trained his sights 20 yards from goal with 10 minutes to play.

But there were no further additions to the scoresheet, meaning Madrid remain in dominant control of the section with maximum points ahead of a reverse meeting of these two clubs at the Santiago Bernabeu on November 4.