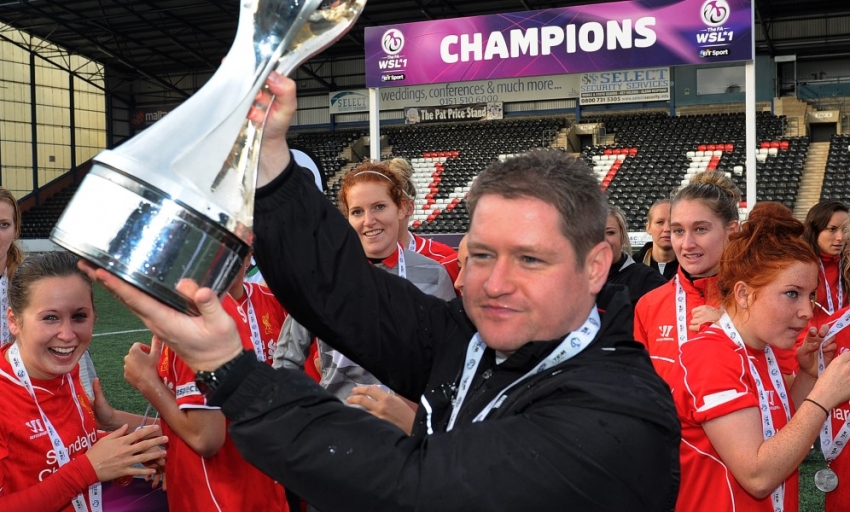 Matt Beard could not hide his delight for and pride in his players after Liverpool Ladies retained their Women's Super League title following a simply incredible final day of the season on Sunday.

The Reds did their job by beating Bristol Academy 3-0 in Widnes, and news subsequently filtered through that Chelsea Ladies and Birmingham City had both dropped points - confirming that the championship would be staying on Merseyside.

"I'm absolutely delighted," the manager enthused to Liverpoolfc.com as celebrations ensued at the Select Security Stadium. "I thought we would win the game and the results went for us, and I'm just so immensely proud of this group of players.

"We had such a tough game in the Champions League on Wednesday night and I'm so proud of the players, and all of my staff as well because they deserve a lot of credit. This is the toughest thing to do, to defend your title - now we have done it I am just so proud.

"At the start of the season we lost Nicole Rolser and Lucy Staniforth and then had a spell when we had eight players out injured and I didn't expect us to win it again. All we kept focusing on was making sure we got into the top two to qualify for the Champions League. So to win it is an unbelievable achievement."

Amid the excitement in Widnes, at the forefront of Beard's reflections too was Gemma Davison, whose brilliant stoppage-time equaliser in the 3-3 draw with Arsenal last weekend proved to be a pivotal moment.

He added: "That goal from Gemma in stoppage time, the 93rd minute last week, has probably won us the title. This team never give up and we know anything can happen in football."

The Ladies have been strongly backed by a committed group of supporters throughout their campaign and the boss was keen to express his sincere gratitude to the fans who again roared the team on this afternoon.

"They have been fantastic all season," commented Beard. "They have travelled home and away and they give the players a lift, especially today because they were a bit tired after the Champions League game."

The celebrations will have to be put on ice for now, though, as Beard and his squad prepare for the second leg of their Champions League knockout tie against Linkopings FC in Sweden on Thursday.

He said: "This is a massive boost for us going into the second leg. Last season, we could celebrate but we can't do that tonight and we've got to be disciplined because we have got such a big game. We want to prolong our season and progress in the Champions League. If we can do that then it will finish off what a fantastic season we have had."