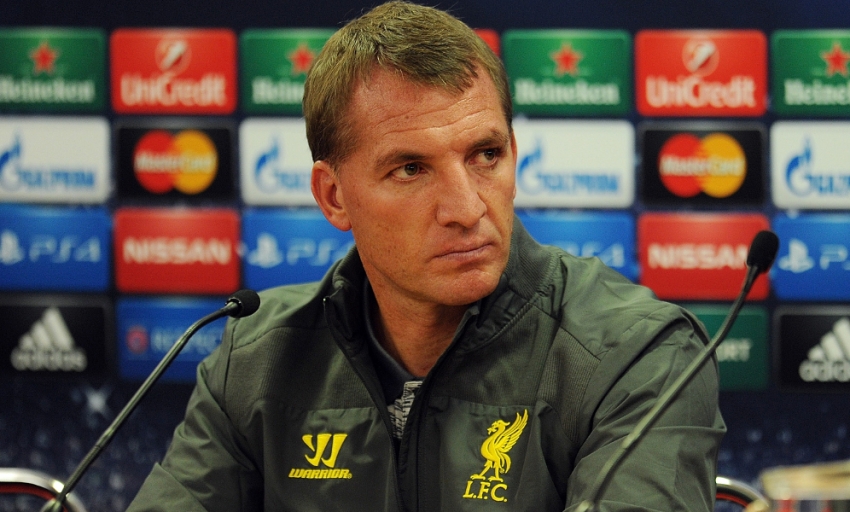 Get your 100 page special CL programme

Brendan Rodgers admits he will be filled with a sense of immense pride when he leads Liverpool back into the Champions League on Tuesday night - but mainly for the fans who have provided his team with their unrivalled support.

The Reds will end a five-year absence from the competition when they play host to Ludogorets Razgrad in the Group B opener at Anfield.

For Rodgers, he acknowledges it'll be an honour to manage the Reds in the tournament and is delighted Kopites are able to once again plot trips across the continent following their team in action.

The boss told a pre-match press conference at Anfield: "I am more privileged to be in it for the supporters, to be honest.

"It's part of my journey as a coach, of course - it's the level that every manager and coach wants to work at. But to be able to lead such a special club and return back to the Champions League, I'm very privileged to be able to do that.

"It's not about myself or anything to do with me, it's about the supporters and the players.

"It will be special. I remember my first game as the manager of this club. It's probably one of the only games I've kept the shirt from, which was the first game in the qualifying rounds of the Europa League [against Gomel in Belarus]. It was a very special moment because it was my first competitive game.

"Tomorrow night will be extremely special - because it's in the Champions League and because it's here at Anfield.

"Every day is a huge privilege for me to manage at Liverpool and tomorrow night will be exactly that."

Rodgers continued: "We're very excited. Five years is a long time - December 2009 was the last game here at Anfield in the Champions League.

"Success is qualifying from the group. We'll take one game at a time. We're at home in our first game and we aim to perform well and get three points.

"Our overriding objective initially is to come out of the group and qualify."

A series of meetings with supporters in his office at Melwood has left Rodgers in no doubt about the special relationship Liverpool has with the European Cup.

And as excitement levels continue to rise ahead of kick-off against Ludogorets, the manager is eager to ensure the Reds are regular participants in the competition under his tenure.

"Over the last couple of days when the game becomes close and the Champions League footballs come out on the training field, it brings home how long the club has been away - it's probably been too long," considered Rodgers.

"When I came in, that was my main priority - to get the club back to this level. This is a club that really needs to be at this level, both for itself and for football in general. It's one of the footballing greats in the world, and this is the elite competition in club football.

"It feels brilliant to be back and coming off the back of a defeat, it's even more important for us because the game can't come quick enough for us. Last season we would have had to wait a week.

"I think the supporters are really going to enjoy it. I've had a few of them in my office in the last week or so talking about the group games and everything here, and what they're looking forward to.

"So for them, I know first-hand they are really looking forward to being back, travelling throughout Europe again. That's why we do it - we do it for the supporters."

That defeat Rodgers is eager to avenge was Saturday's 1-0 Anfield reversal to Aston Villa.

Gabriel Agbonlahor capitalised on some uncertainty at a corner to grab the only goal of the game after nine minutes - and Rodgers acknowledges the need for improvement.

"We need to be better in those areas," he said. "We were disappointed at the weekend - it's a game where when you dominate with the ball but don't score, you at least want to get a point from it. We're disappointed with the corner and how we conceded.

"It's continual work. We've brought in players that understand the way we work, but it's still going to take that little bit of time.

"We had four players making their Anfield debuts at the weekend and the cohesion does take a little bit of time. At Tottenham, we had most of the players who have been working with us for a while in terms of the base of our team.

"Our emphasis will always be positive, but for sure we need to tighten up in some areas."

So what of Ludogorets, the Bulgarian champions who qualified for the group stage in the most sensational of circumstances when centre-back Cosmin Moti became a club legend by saving two penalties as a makeshift goalkeeper in the shootout win over Steaua Bucharest?

"Like all games at this level, it'll be a tough game for us," stated Rodgers. "They're a top team in Bulgaria; we've had them watched and done a lot of research and analysis on them once we knew they were in our group.

"They play an open and attacking style of football. They play 4-2-3-1 and the two full-backs look to get forward. They have two controlling players in midfield, a No.10 who moves well and wingers who are probably a little more stretched than you usually see with wingers nowadays.

"They're a team that want to attack and work well. I think they're fourth in their league at the moment and are seven games unbeaten, so they'll come here with confidence and look to perform how they've been doing back in Bulgaria.

"We'll need to be concentrated, but for us at Anfield, it's very much about ourselves. We need to start and be really aggressive with our pressing and have a bit more tempo to our passing. That will ignite the crowd here, who have been brilliant for us during my time here. We know they'll be a tough opponent."