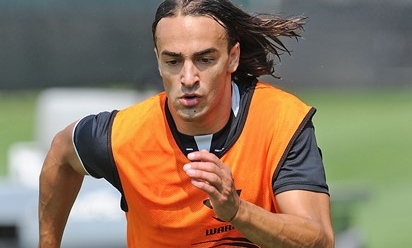 As he nears a return to full fitness, Lazar Markovic has outlined why he'll do everything he can to help Liverpool mount another challenge for the Barclays Premier League title.

Since completing his move from Benfica, injury has meant the Serbian winger has been restricted to just 45 minutes of action in a pre-season friendly against Olympiacos in Chicago.

However, Brendan Rodgers confirmed on Sunday Markovic is back in contention - and the 20-year-old is setting his sights high as he prepares to begin his first season in English football.

"I'm not afraid of challenges," he said. "It was the same when they took me on trial at Partizan [Belgrade], when the Benfica offer arrived and when Liverpool signalled that they wanted me in their ranks.

"I believe in myself and in the luck that's following me. I believe in the people in charge of my career. That is why I go with my dreams.

"I do not have any fear or stage fright whatsoever. To tell you the truth, I can't wait to start playing for Liverpool.

"The competition is fierce but I did not come to Anfield to fight for sixth or seventh place.

"Liverpool and our fans deserve the return of the most important trophy. I would love to be a part of the generation that brings this trophy back to Liverpool.

"With the Premier League and the Champions League, we'll be going for it on both fronts. There are a lot of reasons for optimism. This club is very ambitious."

In his four seasons in professional football, Markovic has lifted a league title in each - three with Partizan and one with Benfica.

He believes his solitary campaign in Portugal helped improve his game - and now he's looking forward to working alongside new boss Rodgers and taking the next steps in his development.

"As long as I live I will be thankful to the coach, his assistants, my teammates, all the physios and doctors, the president of the club, the board members, and every single fan for making me the player that I am today.

"I was still a little child when my parents explained to me that smart people work on themselves and learn as long as they live.

"I believe that Mr Rodgers will help me to become even better, just like he did with other young players. We'll see where the coach will put me because I can play many positions and for every one of them there is great competition. I will give it my all."

Markovic admits he's been impressed by the welcome he's received from his new colleagues at Melwood since he completed his transfer in July - not least from captain, Steven Gerrard.

"When we say Liverpool most of us think of Steven Gerrard, and that's not only the case with us who were born in the 90s," he added.

"He is a legend, an icon, the king of the club. Yet still he is completely natural and normal.

"We all listen to him and treat him with the utmost respect. He welcomed me like a true captain and a great gentleman, just like he did with all the other new guys."