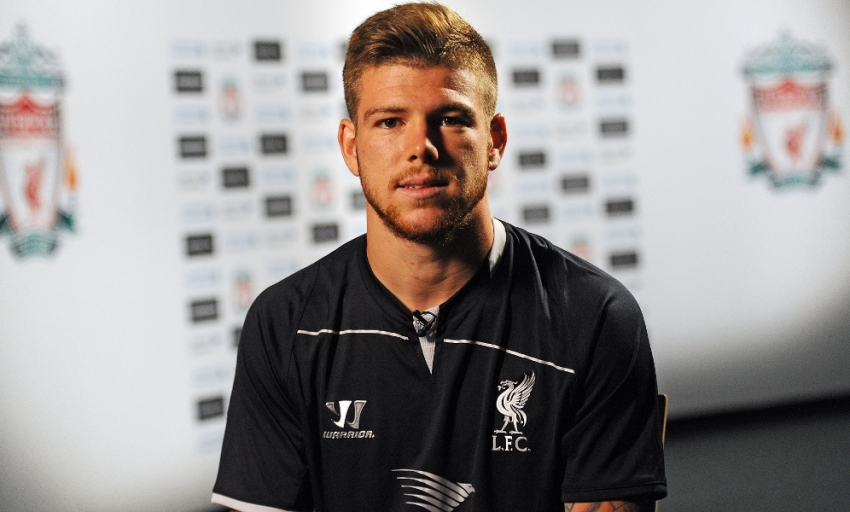 Alberto Moreno has explained how a trio of former Spanish Anfield heroes played a role in helping convince him to swap hometown club Sevilla for Liverpool.

The 22-year-old put pen to paper on a long-term deal with the Reds today to become Brendan Rodgers' eighth signing of the summer.

Moments after inking his contract at Melwood, Moreno sat down with Liverpoolfc.com to chat about his move - and revealed he has spoken to Xabi Alonso, Pepe Reina and Alvaro Arbeloa in recent weeks, all of whom urged him to make the switch to Merseyside.

The Spain international also outlined what he hopes to achieve over the course of his Reds career, and why he's looking forward to catching up with some old friends.

LFCTV GO subscribers can watch the interview in full by pressing play on the embedded video below. Need a subscription? Sign up now.

Alternatively, scroll down to read a full transcript of our exclusive chat with Liverpool's latest recruit.

Alberto, welcome to Liverpool Football Club. How does it feel to have signed for the club?

I'm very happy to be joining a club as big as Liverpool. I hope to give my best and do all I can to help Liverpool.

What attracted you to Liverpool FC?

Apart from being a great club historically, I know people here see football in a unique way. In my view, Liverpool are the best club in England and I couldn't waste an opportunity to come and play for them.

We saw you upset at the end of Sevilla's Super Cup match with Real Madrid. Was it a hard decision for you to leave them?

I've been at Sevilla since I was very young - from 2004 until today. I couldn't help feeling emotional, but coming to Liverpool was a great opportunity and one which I couldn't turn down.

You clearly had a strong relationship with the Sevilla fans; is that something you are hoping to recreate with Liverpool supporters in the coming weeks and months?

I certainly hope so. If my relationship with Liverpool supporters develops in the same way it did with Sevilla fans, then it'll be a good indication that they are happy to have me here.

A lot of Spaniards have played for Liverpool - have you spoken to any of them about the club and what have they told you?

I spoke with Xabi Alonso, Pepe Reina and Alvaro Arbeloa and they told me this is a spectacular club whose fans follow it in a very special way. They all told me I can grow a lot here as a footballer as this is a massive club.

What has your close friend Luis Alberto told you about Liverpool?

He told me the same as Xabi, Pepe and Arbeloa did. This city has its own special way of following football and people are very respectful. They said it's incredible when you go out onto the pitch at Anfield as the fans are very supportive and they will always be behind me. They told me I'll feel very happy here.

How about your old teammates David De Gea or Alvaro Negredo, both of whom are playing in the Premier League? Have you spoken to them?

I haven't spoken with them as yet but I'm sure we'll get a chance to do so.

There are some Spanish players already here too, of course. How important will the likes of Jose Enrique, Suso and Javier Manquillo be in helping you settle here?

They're going to be important. It's a different country and a different language for me, but I'm hoping it'll be easier to settle here with their help. Moreover, Suso and Manquillo are my teammates with the Spanish U21 team. I have a good relationship with them, and that'll be good for us.

You've been speaking to the manager, Brendan Rodgers, in Spanish today. What kind of things did he say to you when you arrived here at Melwood?

He told me I'm strong! He said he's been to Sevilla and told me the weather here is not as hot as there. He also said that football is beautiful here. I told him I'll be at his disposal as soon as I am in my best condition.

What excites you most about this new challenge in your career?

I know people live football intensely in this city, especially the Liverpool fans at Anfield, which is a stadium with plenty of history. I think that is what inspires me the most to want to play here.

What do you hope to add to this Liverpool team?

I think I can add my willingness to play, my aggression, hard work and being part of the team - always sticking together.

For those who haven't seen you play, how would you describe your playing style?

I don't really like to describe myself; however, I think my main qualities are speed, precision when striking the ball and overall presence on the pitch.

Who have been the biggest influences on your career? Who have you tried to base your game on?

Antonio Puerta was a great influence for me when I was at the academy at Sevilla, but nowadays I look up to Jordi Alba and Marcelo.

Liverpool had a great season last season. Did you manage to see any of it from Spain and, if so, what did you make of it?

I watched a lot of games and noticed the team are very incisive and determined, with fast attacking players who can decide a game at any moment. The defence is strong and solid, hard to beat and to score against.

You just missed out on the Spain squad for the World Cup. Will playing for Liverpool enhance your international opportunities?

I think that's up to the player as well. Of course, if a player is not only in good form, but also playing for a big club, then that is probably helpful in getting a place with the national team. I believe working hard from day to day, match to match, is what can help me the most to secure a place in the Spanish national team.

The new season starts this weekend. How much does the prospect of playing in the Premier League excite you?

A lot. I am looking forward to playing in the Premier League. I come here with big hopes and a keenness to keep growing as a footballer. I believe this club will give me a chance to grow as a footballer and become a great player.

There's also the Champions League to come too. Are you looking forward to being a part of some of those incredible nights at Anfield?

Anfield is a stadium known throughout the world. How happy are you to have the chance of playing there regularly?

Not all players are lucky enough to play at such an incredible stadium like Anfield. Liverpool have given me such opportunity and I will enjoy it and give it my best.

At 22 years old, you're still a very young man. How much more do you feel there is to come from you?

I was promoted to the Sevilla first team only a year-and-a-half ago - I know that's not a long time and I still have a lot to learn and improve. At a club like Liverpool, which has a number of great players, I know I'll have the opportunity to grow. The Premier League is also very competitive and I hope that will also be helpful for me to develop as a player.

In the last two years you've become a regular for Sevilla, played for Spain and now signed for Liverpool... do you have to pinch yourself from time to time?

It's hard to define how to feel as I'm only 22. It was great to have the opportunity to play for my hometown club and for their first team. This year, I was also called up for the Spanish national team and now I have signed for Liverpool. I suppose any player would like to have this chance. But I'm still very young and I want to keep growing as a footballer as I know I still have a lot to learn.

Finally, what do you hope to achieve here at Liverpool?

My biggest dream is to win a lot of trophies with Liverpool. I believe we have a good squad this year, which is very young and keen to win and succeed. I believe we can achieve beautiful things together here.