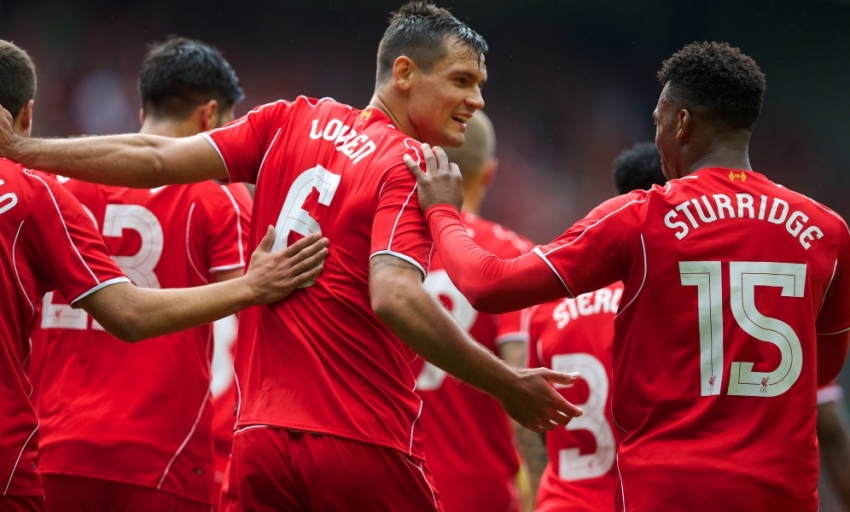 Liverpool signed off pre-season with a masterclass performance against European heavyweights Borussia Dortmund on Sunday, handsomely downing the German side 4-0 in a friendly at Anfield.

Recent signings Dejan Lovren and Javier Manquillo were handed maiden appearances for their new club, while Kopites could finally watch midfielder Emre Can, and later Rickie Lambert as a substitute, at close quarters.

A mutual rendition of 'You'll Never Walk Alone' shortly before proceedings kicked off was an example of the warmth held between the two clubs, but friendship was quickly put to one side when the referee's whistle signalled the start.

The first-half Liverpool display was a seamless extension of what passed in L4 during the previous campaign, with Daniel Sturridge breaking the deadlock and Lovren adding a second in 270 blistering seconds of forward-thinking football.

Philippe Coutinho's driven conversion early in the second period paved the way for complete dominance in the home outfit's favour, which was further emphasised when Jordan Henderson clocked up a fourth on 60 minutes.

Oliver Kirch and Milos Jojic had combined to work a first sight of goal for either team after three minutes, but the former's ultimate shot was harmless to Simon Mignolet once the latter had driven dangerously toward the penalty area from halfway.

Within seconds, the rapid interchanges that lit up the Barclays Premier League last season were in evidence again - Coutinho threaded through to Raheem Sterling, who struck low with his left foot but was thwarted by Mitchell Langerak.

On 10 minutes, Sturridge picked up exactly where he left off in 2013-14. Coutinho dispatched a magical flick around the corner of the Dortmund defence perfectly into the path of the No.15 and the striker effortlessly toe-poked into the opposite corner from the right channel.

Within moments, Steven Gerrard paused over a corner kick before curling invitingly into the Borussia six-yard box, where Lovren was afforded too much time and space for a man of his stature. The end result? A precise header beyond Langerak.

Coutinho side-footed off target to the right from 20 yards at an admittedly awkward height, then the Brazilian switched modes to set up Sterling with yet another unstoppable through pass, though the 19-year-old saw his effort blocked.

The waves kept coming and when Sturridge drew a foul in a promising central position by skipping inside, Gerrard stood over the ball. A technically sound swinger was unleashed, but Langerak stretched just about enough to tip away and keep the score at 2-0 before the break.

Rodgers' charges were by no means satisfied, however, and barely three minutes had elapsed after the restart when Coutinho collected a smart Sterling delivery just inside Dortmund territory, turned and drove past the goalkeeper for a Liverpool third.

The Reds' No.10 was at his imperious best and mere inches denied him a truly sensational team goal as the playmaker rapidly exchanged possession with a series of teammates and scurried into the penalty box only to eventually shoot too wide.

Despite that personal disappointment, it immediately mattered little collectively - Sturridge scooped up the loose ball on the right side, advanced to the byline and cut back for the waiting Henderson to comfortably redirect into the back of the Kop net with an hour played.

And that was more than enough for the hosts, navigating an eighth pre-season fixture in style and concluding their preparation for the upcoming campaign ahead of their Premier League opener against Southampton in seven days' time.