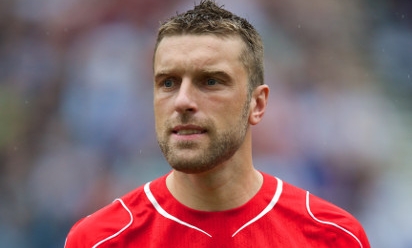 Liverpool striker Rickie Lambert has hailed Raheem Sterling, predicting the teen sensation will have an 'unbelievable' season as the Reds prepare for the new campaign.

Lambert was speaking as the Reds prepared to return home following their two-week tour of North America, where Sterling has carried on the fantastic form he showed during the second-half of last season's Barclays Premier League campaign.

Those performances saw the 19-year-old secure a place alongside Lambert in England's World Cup squad in Brazil. Now, as club teammates, Liverpool's new No.9 believes the winger can carry on where he left off as the Reds prepare for another assault on the league title.

"I've been really impressed by Razza [Raheem] on this trip and if he keeps on progressing the way he has done over the past year or two he's going to have an unbelievable season," said Lambert.

"I don't want to put pressure on him but I think he can handle anything that comes his way. He's a top lad as well.

"Nothing fazes him and that's full credit to the management. The manager has created an environment for the young kids to go and thrive and you can see the benefits of that."

Spending an additional fortnight away with his new teammates in the US has given Lambert the perfect opportunity to fully integrate into the Reds' squad, and strike up further understanding with fellow striker, Daniel Sturridge.

"We played and trained a bit together with England so I kind of know Daniel's game," Lambert said.

"I'm learning more and more about him each day. He's a special player and has got so much about his game.

"He's a top player and it makes my job a lot easier playing with someone as good as that."