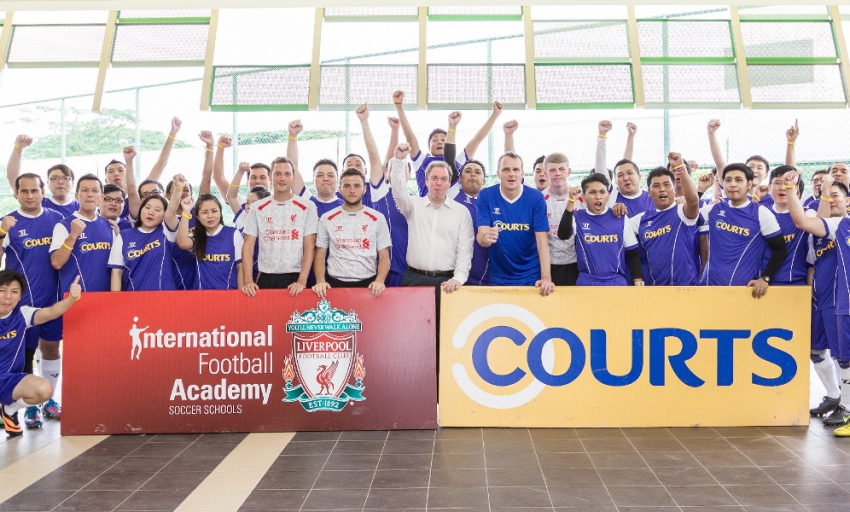 Liverpool and Courts Asia, a leading IT, electronics and furniture retailer in south east Asia, today announced a two year extension to their regional partnership in Singapore and Malaysia.

This takes the current deal up to the end of the 2015-16 Barclays Premier League season.

Courts has been a partner of the club since 2008, making this one of the longest running regional partnerships between a Premier League club and a brand with deep roots in south east Asia.

The extension to the current deal will see Courts continue their great work and commitment to nurture football talent throughout Singapore and Malaysia, giving young supporters the opportunity to play football 'The Liverpool Way'.

The partnership will also provide exciting campaigns offering fans in the region signed merchandise and the chance of winning VIP tickets to watch the team they love play at the home of the Reds, Anfield.

One highly anticipated event is the Courts and Liverpool Football Academy, where young aspiring footballers have the opportunity to be coached by Academy-certified coaches and an LFC legend. This will take place at the end of this year.

Commenting on the partnership extension, Billy Hogan, chief commercial officer at Liverpool FC, said: "We're very proud of our partnership with Courts who have a shared vision of supporting grassroots football in Singapore and Malaysia. This is the longest regional partnership of its kind, so it's fantastic to be able to announce this extension.

"As a club, we have over nine million followers across Singapore and Malaysia and by partnering with one of the biggest retailers in these markets, we're able to work together to bring fans closer to their club."

Mr Terry O'Connor, group CEO of Courts Asia, said: "The extension of our partnership with LFC underlines our commitment to continue bringing unique football experiences to our customers, football fans and the community. Our various collaborations through the years have been instrumental in our journey to unite and inspire football fans, and most importantly, nurture budding young talent.

"As Courts celebrates its 40th birthday in Asia this year, we look forward to evolving the partnership over the course of the next two seasons and will continue to champion the growth and development of football in the region."

As an official regional marketing partner of Liverpool FC in Singapore and Malaysia over the past six years, Courts has implemented several initiatives that have engaged thousands of fans across the region. Courts created a 360-degree campaign which integrated multi-platform elements including a video-based skills competition, in-store and shopping mall activities, charitable initiatives, digital media activity and a highly acclaimed TV commercial.

Most recently, young talents were given the chance to be coached by LFC's International Football Academy coaching staff at exclusive Courts training camps in Singapore and Malaysia, with special appearances by LFC legends, Ian Rush and Didi Hamann.

Courts also sponsored an all-expense trip for fans to watch a home game at Anfield.