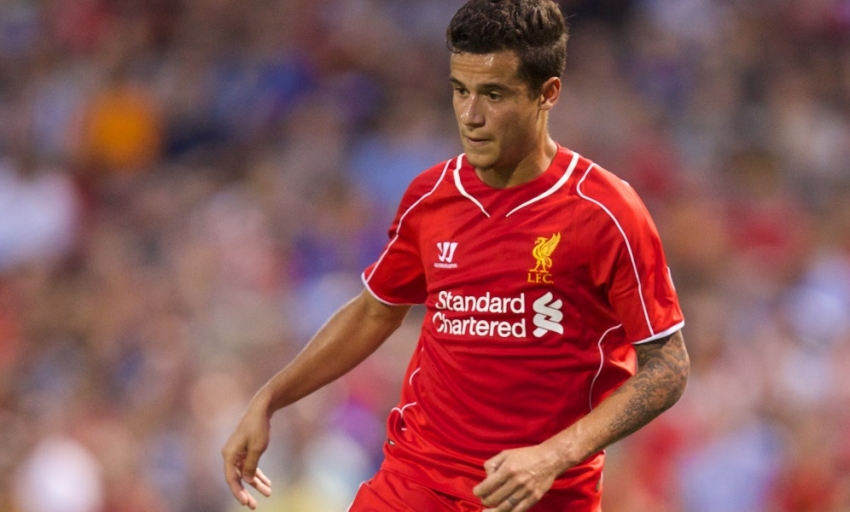 Brendan Rodgers described Philippe Coutinho as 'the brain' of his Liverpool team after the Brazilian turned in another stellar performance as the Reds were overturned 1-0 by AS Roma.

The No.10 displayed much of his unique repertoire of passing, close control and trickery during the clash at Fenway Park in Boston, the first of the club's pre-season tour of America.

A late goal by the Italians was the decider at the conclusion of a hard-fought match at the iconic baseball venue, which was regularly lit up by the technique of Coutinho.

"Coutinho is the brain in our team, the continuity player," said the boss later. "He might not score many goals, but he's a wonderful reference for the team.

"He is the one that gets the team ticking, gets the movement in front of the ball. He goes and gets on the ball. He's a fantastic talent for such a young player and he's still gaining his fitness.

"He makes the crowd get off their seat. For someone so small, he's very tough and robust. He's a wonderful technician that has a great idea, tactically, of the game."

On the encounter itself, the Northern Irishman continued: "These are two Champions League teams, two teams that are at a good level of pre-season and two sets of committed players that are very competitive.

"Pre-season friendly or not, both teams wanted to play well and work well. I thought it was a perfect game at this stage of our preparation phase.

"This is one of a number of good games that we've got coming up that are going to really sharpen us up for the beginning of the season."

The Reds have now won one and lost two of their first three preparation fixtures for the new campaign, with four further matches on the schedule before the opener.

Next up is a trip to Chicago for Olympiacos before taking on Manchester City and AC Milan in the States and returning to Anfield to host German contenders Borussia Dortmund.

"It's not about results at this stage," Rodgers explained to reporters gathered inside Fenway. "The most important result for me is the first game of the season.

"You have a choice - you can play friendlies that probably make you win every game and you might not find anything out. We've got a really tough set of fixtures over the course of the pre-season.

"We've got a great tour out here and then we go back and within a few days we'll play Borussia Dortmund. We're really pitching ourselves in at a good level to get a good gauge.

"The most important objective is that we're in a really good physical condition for our first game of the season, against Southampton.

"And that technically and tactically, we'll have honed up all of the principles and ideas that have made us so successful in the last couple of years. That will be the most important result for us."

The manager also revealed that the likes of Adam Lallana and Lazar Markovic, summer recruits, plus the returning England contingent are in line to feature from Chicago onwards.

He added: "They only really began training on Monday. I put Jordan Henderson in because of his level of fitness. Jordan could play 10 games on the spin because he's so fit and strong.

"It was nice to give him a 15-minute period at the end. But those players, like young Markovic, who is an exceptional talent, will be involved when we arrive in Chicago."