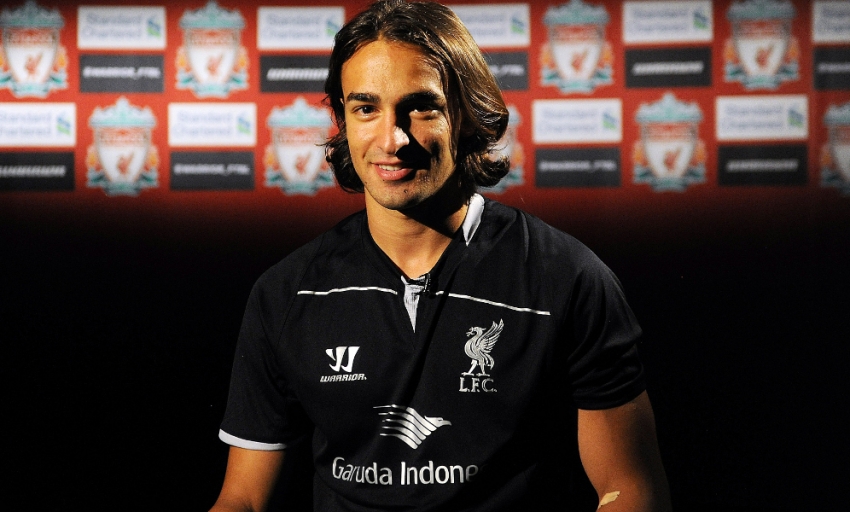 Lazar Markovic has set his sights on maintaining a unique personal record by helping Liverpool go one better in the Barclays Premier League this season.

The 20-year-old forward completed his transfer from Benfica on Tuesday after signing a long-term deal at Melwood.

He arrives with an already impressive CV, which boasts league title winning medals in each of his four professional seasons so far with Partizan and Benfica.

Moments after putting pen to paper on his contract, Markovic sat down with Liverpoolfc.com at the club's training complex to speak about his switch to Merseyside.

LFCTV GO subscribers can watch the chat with the Serbia international in full by clicking play on the embedded video below. Need a subscription? Sign up now. Alternatively, you can read the full transcript below.

Lazar, welcome to Liverpool Football Club. How do you feel to have signed for this club?

I am very happy that I have joined such a great club. I hope that I will fulfil the expectations of the supporters, coaches, players and all connected to the club.

What was your reaction when you found out Liverpool were interested in you?

I was delighted and increased my efforts in playing and training at the prospect of joining such a great club.

What was the biggest surprise in joining Liverpool?

Being asked to join! It is a surprise being here.

How exciting is the prospect of now getting the opportunity to play in the Premier League?

The Premier League is the strongest league in the world, and so I am very happy to be here.

And the Champions League, too. You must be looking forward to experiencing that?

I have already played in the Champions League with Benfica. It is superb that Liverpool are in it and I hope we will go far next season.

Have you had a chance to catch up with the manager, Brendan Rodgers? What has he said to you?

Nothing special. He told me what position I will be playing in the team and I am here to fulfil his expectations.

We know you can play in a few positions, but which would be your preference?

I do not mind. The left side is preferable, but I will play wherever I am asked.

What do you think you can offer Liverpool?

It is not my place to say, really, but hopefully my contribution on the pitch will show.

Liverpool had an excellent campaign last year, finishing second. Did you follow it from Portugal?

I watched every game and they played absolutely superb. It is a shame they did not win the title - but I hope we will win it this season.

Which players are you most excited to play alongside?

I could not favour any one of them. They are all equally good...but maybe the captain, Gerrard, as he is the team's leader.

You spent one season with Benfica, how important was that for you?

It was very important because if it wasn't for Benfica, I probably wouldn't be here. This is my opportunity to say thank you to all the players, president and all involved at the club.

You've won the league title in each of your four seasons as a professional. Which of those gave you the most experience and the basis to get here now to Liverpool?

There isn't one in particular, really. All were hard work and I benefited from each of them - and all of which have resulted in me being here today.

You have never played at Anfield before, how excited are you about the prospect of that?

Have you spoken to your international teammates Matija Nastasic and Nemanja Matic, who play for Manchester City and Chelsea respectively, about playing in the Premier League?

I spoke to them both a couple of days ago and they are very happy that I am here, and I am looking forward to playing against them.

Finally, what would your message to Liverpool fans be?