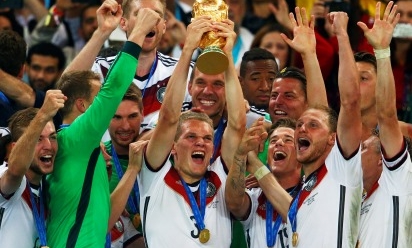 Current Liverpool players and former Reds were sharing their thoughts on social media throughout the World Cup final on Sunday, which saw Germany crowned champions in Rio de Janeiro.

Substitute Mario Gotze volleyed home the winner in extra time to down Argentina 1-0 at the Maracana and thereby earn his country the trophy for a fourth time in their history.

Scroll down the page for a selection of reactions to the match, the crucial goal and thoughts on the tournament as a whole.

Brilliant volley at full stretch from sub Goetze to surely win it for the Germans! Still time for Argentina and pens!

Congrats to Germany probably best team throughout the tournament.

Well done boys ... Outstanding after so many near misses ... Schweinsteiger in a different league

Not even gonna lie I'm jealous it's not me. Fuel for the fire I guess... One day I hope to help England win something. That's the dream...

Congratulations to #germany. They completly deserve it. Good night to everyone

Congratulations to Germany! The best team in the tournament won. Well done Sami and @MesutOzil1088 , enjoy it!!