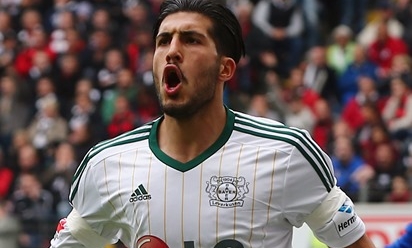 'It has been an interesting few years!'

Liverpool have today agreed a deal in principle with Bayer Leverkusen for Emre Can, subject to documentation being completed. Here is an in-depth lowdown on the German youngster...

Having represented his country across all youth levels, captaining their U17 World Cup campaign in 2011, the 20-year-old's switch to Merseyside is another exciting signing for the Reds.

Combining a mixture of power and poise, the versatile player is well versed in piloting the pace of games, especially when he is deployed in a deep midfield role. Can revels in box-to-box responsibilities, but has also performed effectively on the left as an attacker and full-back, as well as in central defence.

The Bayer Leverkusen asset is exactly the kind of emerging talent that Liverpool boss Brendan Rodgers enjoys working with, as his resourcefulness illustrates a wealth of football intelligence.

Perhaps the perfect taster of Can's catalogue of skills is the goal he scored against Mexico in the semi-finals of the U17 World Cup. It was a coming together of beauty and beast; he received the ball with three markers closing in on him, skipped past one and paced forward before escaping two other opponents and evading the goalkeeper to finish expertly.

The move was typical of the aggressiveness on the ball Liverpool displayed last season, and the club will want Can to help continue the trend in the new campaign. His progress has been closely monitored by top clubs since the start of his youth career at SV Blau-Gelb Frankfurt and Eintracht Frankfurt, where it was evident Can boasted brilliance beyond his years.

In 2009, Bayern Munich recognised his talents and secured his signature. In a bid to aid his acceleration into first-team football, the German giants sold him to Leverkusen in August 2013.

"Emre Can is one of the biggest talents in German football," said Bayern chairman Karl-Heinz Rummenigge at the time. "With this step, we want to make sure he gets enough playing practice, for example like Toni Kroos had at Leverkusen, Philipp Lahm at Stuttgart or David Alaba at Hoffenheim."

Can's performances while at Leverkusen attracted Liverpool to his excellence. He shone in both the Bundesliga and Champions League, the latter in which he made his debut against Manchester United at Old Trafford.

In 32 starts across all competitions last season, Can netted four goals and notched up four assists, while largely operating in a defensive capacity.

The deal marks the fourth occasion a player has arrived at Anfield from Leverkusen, with the other three all being strikers in Yesil, Erik Meijer and Andriy Voronin.