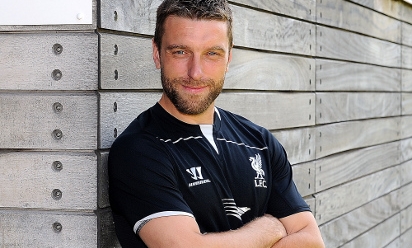 Brendan Rodgers has been a long-term admirer of 'terrific' England striker Rickie Lambert, who today became the Northern Irishman's first signing of the summer transfer window for Liverpool.

The 32-year-old briefly paused preparations for the World Cup in Brazil later this month to complete a switch to the Reds, passing a medical, agreeing terms and inking his contract at Melwood.

A boyhood Kopite, Lambert has travelled a long route to the top of his sport, progressing through the lower leagues of English football to the Barclays Premier League and international recognition.

In his past two seasons in the top flight with Southampton, the powerful forward missed just one fixture and registered 28 goals, thriving as the spearhead of a technical, youthful outfit.

Rodgers revealed his appreciation for the man he has now brought to Anfield as long ago as last September, when the manager and his Reds team prepared to welcome the Saints to Merseyside.

"I've seen Rickie Lambert over the years and he's one of those players that probably never got the recognition for what a really good footballer he is," he commented.

"It's only late on in his career - at 29, 30, 31 - that people are really starting to focus on his qualities. He was probably seen as the traditional big No.9, a British striker that is good in the air.

"But he's one of the most accomplished footballers I've seen. It has been so refreshing that he's got his call into the England team, and he certainly hasn't let anyone down - he has been outstanding.

"Look at his touch, look at the level of his goals, the different types of goals he has scored over his career, and he's a specialist on penalties as well.

"I think he is a terrific footballer and any team he plays against, he's always a handful."