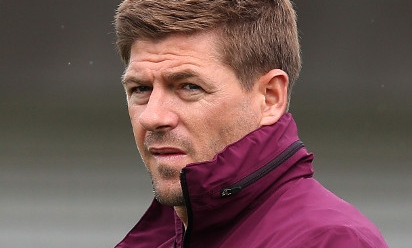 Jordan Henderson believes he has forged a special on-pitch partnership with Steven Gerrard that can help England hit the ground running at next month's FIFA World Cup.

Henderson and Gerrard are two of five Liverpool stars who will travel to South America as part of Roy Hodgson's 23-man Three Lions squad to take part in the tournament.

Many pundits expect the Reds duo to take pride of place at the heart of Hodgson's midfield when England get their campaign underway against Italy in Manaus on June 14.

Henderson is desperate to pick up where he and Gerrard left off during the final months of the 2013-14 Barclays Premier League campaign.

The pair were crucial to Liverpool's title challenge, which gathered momentum from February onwards - and Henderson believes an important understanding between the two has slowly developed.

"Since I've been at Liverpool, Stevie has helped me a lot personally - on the field you pick up little things, training with him every week has really been a help to me," he told Sky Sports.

"We've got to keep that relationship going as long as possible and hopefully bring it to England. Me and Stevie have played through the season together and it's worked really well at times.

"But when we come with England it's different, I think it's up to the manager to decide whatever team he wants to put out."

Henderson seemed to grow and grow as Liverpool embarked on a seemingly unstoppable surge towards the Premier League summit during the final months of last season.

Following a 5-1 demolition of Arsenal, when Henderson's energy helped set the tone for a remarkable win; Brendan Rodgers' side swept all comers to rack up 11 consecutive league victories.

However, shortly after Philippe Coutinho's low, curling effort sent Anfield into ecstasy and clinched a 3-2 win over Manchester City, Henderson's challenge on Samir Nasri earned him a straight red card.

It meant the tenacious midfielder would miss three out of Liverpool's final four games of the season - matches which were won, lost and drawn to allow City to clinch the title on the final day of the campaign.

"I think after the last game of the season everybody would have been a little disappointed, that's just natural, but at the same time we were very proud of what we achieved in the season and how far we've come on," insisted Henderson.

"So everybody was delighted by that, the bigger picture if you like. So I think the lads at Liverpool are coming here full of confidence and raring to go for the World Cup."