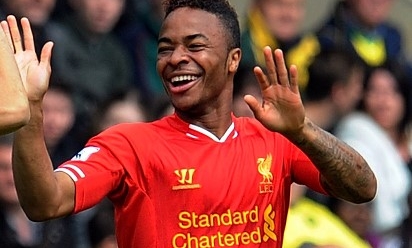 Raheem Sterling was the subject of considerable personal praise from Liverpool manager Brendan Rodgers after providing a crucial contribution to Sunday's narrow victory over Norwich City.

The 19-year-old opened the scoring just four minutes into the Carrow Road encounter, sending a whistling, long-range strike perfectly into the top corner.

It was the forward's precise cross from the left which handed Luis Suarez a simple 30th goal of the campaign, and the No.31's third - a deflected hit following a lengthy dribble - proved the winner.

The brace against the Canaries moved Sterling into double figures for 2013-14, two days after the England international was nominated for the PFA Young Player of the Year honour.

"I think he is arguably the best young player in European football at the moment. He's a talent," enthused Rodgers at his post-match press briefing.

"I've been really pleased with his maturity. He puts an awful lot of time into his work. We've tried to play him in different positions to improve his football intelligence.

"You could see how today he operated at the top of the diamond. He penetrated and was comfortable on the ball. When we switched to 4-3-3, he was the wide player on the side.

"So it really shows you how intelligent he is as a footballer. He's got that in-built brain and belief he can be a good player. He's a really humble kid and it's been great to see.

"His first goal was fantastic; that strike and technique to beat a 'keeper of John Ruddy's quality.

"For the second goal, his set-up was perfect to intercept, breaks away at speed, cuts inside and he gets a bit of luck with the deflection, but every coach or manager will tell you: if you hit the target, you've got a chance of scoring.

"His ball for Suarez's goal - that was a top midfield player just guiding it into the corridor and it was a great finish by Luis."

In registering in East Anglia, Suarez became only the seventh player in Barclays Premier League history to fire 30 times in a single campaign.

"It's 30 goals out of 96, so it shows you that he's an influential player and a world-class talent," added Rodgers.

"The team is about more than one, but it's a great achievement and let's hope he's got a few more goals left in him yet."