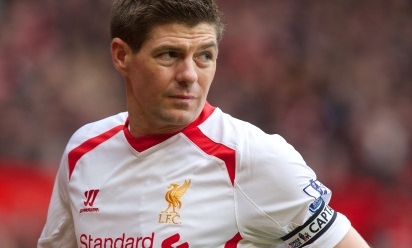 Boss: Why I admire Martin Skrtel

As Brendan Rodgers takes in matches at the highest level of European football, the Liverpool boss has yet to witness a better controller of a midfield than the Reds' captain, Steven Gerrard.

The 33-year-old's transformation from lung-busting, box-to-box talisman to thoughtful, metronomic enforcer - carefully overseen by the Northern Irishman - only began back in January this year.

But the skipper's peerless performances during that period, which have included no less than 10 Barclays Premier League goals from the deeper position, have left his manager in sheer awe.

Rodgers commented: "I think his form sometimes gets lost a bit with Steven because his leadership quality in the team is there for all to see.

"We mustn't forget that he's arguably the best in European football in a controlling role at this moment in time.

"There are not many players who can do what he can do - be one of the best attacking midfield players in Europe and then switch to be arguably the best controlling player.

"You look at the holding players in European football now at the top teams; I wouldn't swap him for any of them, because of what he can give the team."

Gerrard's displays have been a constant guiding hand in Liverpool's sprint to the summit of the Premier League, with the Reds two points clear of Chelsea as they prepare for four more matches.

When the final whistle was blown on the 3-2 victory over Manchester City last Sunday, the No.8 delivered an impassioned and inspirational call for immediate focus to his teammates on the pitch.

The gesture was a moment which epitomised the character of the man; Rodgers believes the Englishman is thriving from his new role and the level of talent surrounding him in the side.

He added: "He's a playmaker but he's unique in that he can also defend. I think what he probably doesn't get enough credit for as well is his reading of the game.

"For as long as I knew Steven Gerrard before I came in here, people would ask: 'Was he a player that just couldn't fit in a team structure?'

"He was the No.10 who needed to roam because he was so good, he needed to do that. He could lift the team and carry the team from whatever position he played.

"But the feature now is about the team and he's in a structure he's happy with. He's got some top talents around him that can exploit his qualities and, along with his intelligence and reading of the game, his physical condition in the role is very good as well.

"I could see him playing in there because of those playmaking skills. He can orchestrate the game."