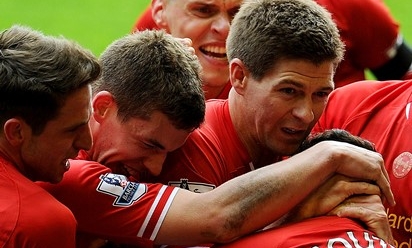 SG: I'll give this month all I've got

When the final whistle blew to signal Liverpool's 3-2 victory over Manchester City on Sunday, Reds captain Steven Gerrard gathered together his teammates for an outpouring of passion and advice.

The 33-year-old and his colleagues had rinsed every ounce of energy available to rouse themselves to a dramatic triumph at Anfield, with Philippe Coutinho's piledriver on 78 minutes proving decisive.

Beating one of their closest rivals at the Barclays Premier League summit, their 10th straight victory in the division, edged Brendan Rodgers' side a step closer to success with four matches remaining.

Gerrard, though, was keen to stress that the win over City was worth just three points - focus must immediately switch to generating a similarly determined display at Norwich City next weekend.

The group of players were visibly enthralled by the skipper's sermon, which was delivered with ferocious desire and intensity. Take a look for yourself by clicking play on the free video below.