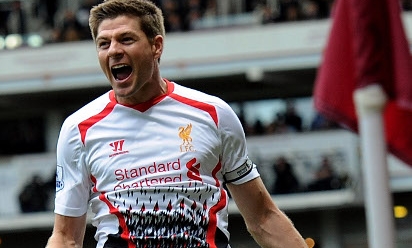 Kop legend Terry McDermott has explained why he believes Steven Gerrard is the best central midfielder to ever pull on the famous red shirt.

Liverpool's inspirational skipper fired two more vital penalties to seal a 2-1 win against West Ham United at Upton Park on Sunday and move ahead of Kenny Dalglish in the Anfield scoring charts.

Gerrard, with 173 goals in 663 appearances, is now sixth in the club's all-time leading goalscorers list.

McDermott played alongside Graeme Souness at the heart of the midfield during his later days at Anfield, but he believes Gerrard is even better than the former treble-winning skipper.

"I've gone on record as saying Steven Gerrard is the best midfield player Liverpool have ever had," McDermott told Liverpoolfc.com.

"I know my mate Graeme Souness would probably give me a rollicking for not saying him, and he was a fantastic player for this club, but Steven has everything.

"Gerrard is in the same sentence for me as Kenny Dalglish and Kevin Keegan. He is Mr Liverpool and I love watching him play.

"He is wholehearted, he gives everything for the red shirt every game and he can do everything. In fact I can't think of anything he can't do and I wouldn't be surprised if he's very good in goal as well."

He added: "I really do think Liverpool can challenge, but they've got to keep everyone fit; the likes of Luis Suarez and Daniel Sturridge - but the key man for me is Gerrard."