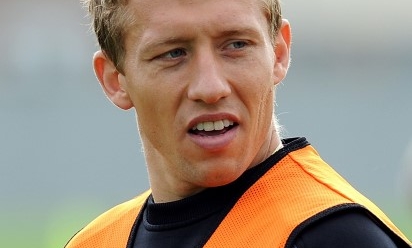 Catch up with Momo in new #LFCWORLD

Brendan Rodgers has labelled Lucas Leiva's approach to overcoming injury and the midfielder's subsequent efforts to force his way back into the Liverpool team as 'incredible'.

The Brazilian last started for the Reds during their pulsating 5-3 victory over Stoke City at the Britannia Stadium on January 12.

Six days later, at Anfield against Aston Villa, he took to the field as a half-time substitute, but was forced to withdraw in the 66th minute with a knee problem.

Scans confirmed the 27-year-old would be ruled out for a couple of months; however, Lucas made a strong and rapid recovery, returning for the U21s in early March.

He was back on the first-team's bench for the stunning 3-0 win over Manchester United at Old Trafford, playing the final four minutes of a truly unforgettable encounter.

Lucas has yet to retain a place in the manager's starting XI - but Rodgers insists the No.21 has maintained a first-class approach to the games regardless.

"I've got to say Lucas has been absolutely incredible in his attitude," he told the Liverpool Echo. "It's been hard for him because he played a high percentage of the games when he was fit and obviously then got his injury.

"The team has done really well in his absence. Steven in that role is a world-class operator. He has taken to it really well.

"The difference now is that rather than playing with two defensive midfield players we are playing with one. There is more emphasis on the attacking element. But I have to pay homage to Lucas because he's been first-class with his attitude and his work.

"He has made it known to me that he just wants to help whenever he's called upon - whether it's for one minute or 90 minutes he will be ready."