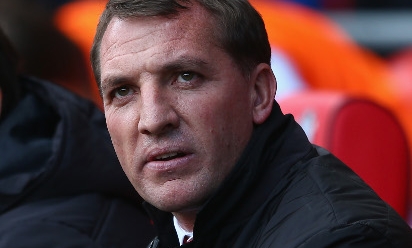 On demand: Analysis of our 6-3 win

Brendan Rodgers was left to once again search for superlatives after watching his Liverpool side rack up another handsome win as they triumphed 6-3 at Cardiff City on Saturday.

Luis Suarez was typically heavily involved, netting a hat-trick to take his tally for the season to 28 goals, and help ensure the Reds remained second  in the Barclays Premier League table.

In the post-match press conference, journalists were once again eager to get Rodgers' thoughts on his omnipotent No.7.

The boss said: "He's a remarkable player. His determination and his desire is at such a high level. He gets his rewards.

"For his first goal, he made a run in behind and he didn't receive the ball. He played himself back onside and after that little spell of possession, we get in behind their defence. It's a great cross by Glen Johnson and he's there to finish. If he doesn't, Daniel Sturridge finishes.

"He's a world-class player, who is enjoying his football and long may it continue."

It was Suarez who netted Liverpool's first goal of the afternoon, cancelling out an opener from Jordan Mutch.

Fraizer Campbell restored Cardiff's lead shortly after, but a double from Skrtel had the Reds ahead moments into the second half.

That's now six goals and counting in 2013-14 for the Slovakian centre-back.

"Every team needs goals from everywhere on the pitch," said Rodgers. "I think that was one of the things I said at the beginning of the season. The defenders have to chip in.

"That's the sixth goal he's scored this season. I said to him before the game that I fancied him to get some goals today.

"He's great at attacking the ball. He doesn't go to sleep for the first goal. He finishes like a striker. He was exceptional today. He's been a real stalwart for us this season."

Suarez was next to find the target - aided by a brilliant back-heel pass from Sturridge - before he turned provider, setting up his strike partner for Liverpool's killer fifth.

Rodgers was eager to highlight the resolve of Sturridge to get on the end of the pass from the Uruguayan.

The manager said: "You saw his will and determination to get into the box for his goal; wonderful strength and power by Glen Johnson to outstrength young Fabio and then he hits a wonderful pass off his left foot, 50 yards.

"Luis takes it down and Daniel has run 70 metres to get into the box. It just shows you the desire of the team. His back-heel to create Luis' goal was sensational. That's what we've got in the team - footballers and technicians that can open up the game for us, we can control the ball. We had large spells of possession which frustrated Cardiff."

While the final scoreline may have been emphatic in Liverpool's favour, Cardiff's early goals had threatened to stage an upset.

Rodgers concedes his team weren't at their brilliant best in their opening exchanges, but was pleased with the manner in which they managed to overcome a difficult start to impose themselves at Cardiff City Stadium.

"We were probably a little bit too deep in the first half; we gave too much space to their players that were a threat - Fraizer Campbell and Craig Bellamy did very well in the opening period of the game," he reflected.

"We lost the ball once or twice too cheaply. But we were still an offensive threat; at half-time we just shortened the pitch a bit more and reinforced our idea to dominate the ball. Obviously that led to our creation of chances.

"We showed great resilience today, mentally, and again showed our offensive power. We all stayed very focused and composed.

"It was an outstanding result for us. Some elements of our game were very good today, against a newly-promoted team, which are always difficult to play against."

Given their status as the league's top scorers, journalists asked Rodgers whether Liverpool had adopted a policy of simply trying to outscore their opponents.

"We don't work to just outscore teams; we work on our balance," replied Rodgers. "We just conceded poor goals.

"We're off the back of two clean sheets - which I take as much pride in - against two difficult teams, Southampton and Manchester United. We conceded too much space, but the key thing is how we respond and how we have grown over the last 18 months.

"There has been that resilience and confidence to know that we can get back in the game. I'm more pleased with that.

"We'll analyse the other elements of the game that we can be better at. That will always be the case - you'll always look to improve.

"Look at our imagination and creativity today; you sensed the crowd felt that every time we were in their half, we could score. That's a wonderful recognition of the type of team that we are. We're certainly not a team that's not worried about defending, that's not the case at all."

The trip to Cardiff was the first of three games in eight days for Liverpool, with Anfield tests against Sunderland and Tottenham Hotspur to follow.

Having not run out in front of the Kop since February 23, Rodgers admits he's looking forward to taking his team back home.

"We're focusing on the immediate future," he said. "I've got to say I'm really looking forward to the Sunderland game. It feels like we haven't played at home for ages. We had three games away on the spin and it was our fourth away win [in the league this year].

"Wednesday will be a great night for us. We've now got five games left at Anfield, with three away from home. Anfield is a special place to play football. So for us, it's about the immediate future.

"That's all we can focus on. The fans can believe and dream. And when you come to see your team play away from home and they score six goals, you've got every right to do that. They've been a big part of our success this year."