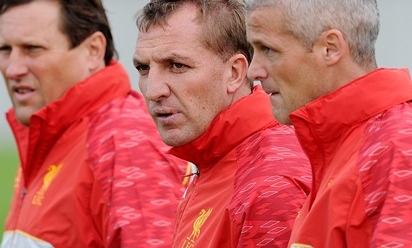 How in-form Reds have excited Robbie

There was never a chance that Mike Marsh would get carried away by Liverpool's current lofty position in the Barclays Premier League.

A former player for the Reds, who later returned to the club's Academy in 2009, the Scouser was promoted to first-team coach following the arrival of Brendan Rodgers.

He has therefore witnessed the Northern Irishman's Anfield revolution at close quarters, as a return to Champions League competition edges closer with each win.

The team's challenge for a place among Europe's elite was further bolstered by a comprehensive 3-0 victory over rivals Manchester United on Sunday.

But the message from Marsh in the aftermath was singularly clear: do not lose focus on the task in hand during what remains of the campaign.

"We haven't achieved anything yet," he told the Liverpool Echo. "We have nine games to go and are in the Champions League places.

"It has been well documented that we started the season wanting to finish in the top four and we are in with a shout of that. Anything more than a top-four finish would be a bonus.

"We are taking each game as it comes and just trying to win every game.

"We have nine games left and are trying to get as many points as we can and see where that takes us. Our goals haven't changed since the start of the season.

"We are second with nine games to go and so are on course to get back in the Champions League; anything better than that would be fantastic."

Marsh described the players as 'brilliant' and explained how the thrilling combination play in attack is the product of supreme hard work undertaken when the team do not have possession.

"It was a great result," he said. "But I was only able to relax towards the end of the game when they went down to 10 men because you can't see yourselves losing from that position.

"The key to the win was that the players worked tirelessly in the game. But we have been playing well for a long time and all their effort and hard work in training is paying off.

"The players have been brilliant and have bought into the way the manager wants to play.

"We are an exciting team to watch but the basis of all of that is hard work. We work hard with or without the ball and the players have bought into that."

On his own development under the stewardship of Rodgers, Marsh added: "I love it. We are having a really good season, which helps, and I am loving every minute of it.

"And seeing the fans' reaction to games like Sunday makes you proud to be part of it.

"Without doubt I am a better coach than I was 18 months ago. A lot of that is down to working alongside the manager and picking up bits and pieces from him.

"You can't stand still in football and you need to be prepared to put the hours in."