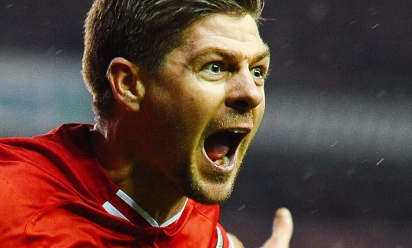 Infographic: The SAS's season so far

Liverpool supporters will never forget the remarkable contributions Steven Gerrard has made to the history of the club – and Southampton striker Rickie Lambert has reason to remember them too.

The powerful Saints forward has progressed from the lower divisions of English football to the Barclays Premier League and international recognition with the Three Lions within five years.

Now the 32-year-old shares a dressing room with a man, in Gerrard, who he has idolised throughout his career and believes the Reds' No.8 remains among the elite players currently in the game.

In an interview with Liverpoolfc.com, fan of the club Lambert was asked whether he continues to consider the skipper as world-class.

"Definitely, without a doubt - but just in a different role now," was his immediate and forthright response.

"He's No.1 for me and I think he always will be. He has meant everything to me, growing up as a Liverpool fan.

Lambert follows Italy and Juventus midfielder Andrea Pirlo as an opponent to reveal their appreciation for Gerrard, who has recently switched to a new, deeper position on the pitch.

Pirlo praised the midfielder for his ability to adapt to a new challenge, and Lambert offered a further explanation of why the 33-year-old deserves credit.

"It's brilliant the way he's adapted his role," the England international added. "He was never going to be able to carry on winning games by himself and running past people from back to front.

"That couldn't go on forever. The way he has adapted his game is unbelievable. We all knew he was going to do it.

"It's a pleasure watching him now in a deeper role, spreading the ball and breaking up play - the way he has done in the past, but the way he's doing it now is brilliant."

Lambert will hope to be alongside his fellow Scouser as part of the England squad which travels to Brazil for this summer's World Cup.

Gerrard was the nation's stand-out player before a quarter-final elimination at Euro 2012 and the Southampton man expects Roy Hodgson to build his team around the talisman once again.

He concluded: "Steven and Wayne [Rooney] are our best players and our team is going to be based around them and rightly so."