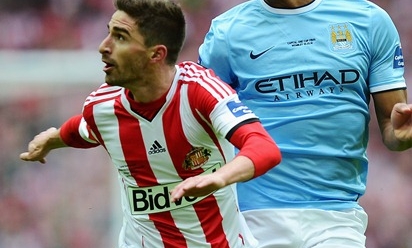 Fabio Borini scored the opening goal of the Capital One Cup final on Sunday but was left disappointed as Sunderland suffered a 3-1 defeat by Manchester City.

The Italian forward needed just 10 minutes to write his name into Wembley history.

Latching onto a lofted pass into the right channel, Borini forced his way beyond Vincent Kompany and, as the shooting angle narrowed, clipped an outside-of-the-foot finish around the goalkeeper and into the corner.

Sunderland had enjoyed the best of the opening period, but City responded in sensational fashion in the second half with two unstoppable goals in as many minutes.

Firstly, midfielder Yaya Toure dispatched a curler flying into the top corner from long range; then Samir Nasri unleashed a rocket of a half-volley which arrowed inside the post.

When the Black Cats pushed forward in search of an equaliser in the closing stages, City countered and added the game-ending third through Jesus Navas from Toure's assist.

Borini has now notched six goals since joining Sunderland on a season-long loan back in September.