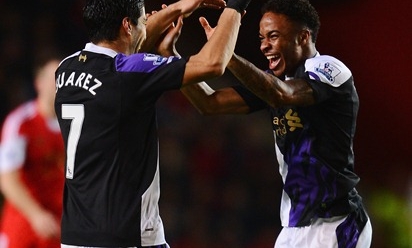 Luis Suarez and Raheem Sterling celebrated Barclays Premier League milestones with a goal apiece as Liverpool stormed to second spot in the standings with a 3-0 triumph at Southampton.

The English top-flight's most prolific player this season broke the deadlock at St Mary's on his 100th appearance in the competition, a ground where history heavily counted against the Reds.

He then become the highest assist provider in the league after setting up the 19-year-old substitute Sterling, who marked his half-century of bows in the division. Steven Gerrard then put the finishing touches on a clinical display by Brendan Rodgers' men from the penalty spot late on.

The Reds made just one change as Joe Allen was restored to the starting line-up following his industrious cameo against Swansea City, replacing the impressive Sterling in a tactical shift to bolster midfield.

Liverpool, with a diamond in the middle of the park, dominated the early phases of possession and put immediate pressure on the hosts. As early as the second minute, Philippe Coutinho was already looking for Suarez with a trademark through ball, but Dejan Lovren was quick to thwart the danger.

The defender was again on hand to head away Jordan Henderson's cross for the Brazilian midfielder, before Jose Fonte was called into action to stop Daniel Sturridge's lay-off across goal to Liverpool's No.7.

On 15 minutes, Adam Lallana produced a peach of a cross for Jay Rodriguez, but Daniel Agger ensured he got a vital touch to keep the scoreline goalless. It didn't stay that way for long, though, as in the next move of the match, the Premier League's top scorer ended a six-game 'drought'.

Suarez made himself available for a throw-in from Glen Johnson on the left, before displaying his superb movement to get into the box while Sturridge tried to play him in. The Saints managed to cut out the pass, but the Uruguayan profited off a ricochet - the ball bounced off Fonte - and finished expertly.

Suarez hit a free-kick off target moments later, before Southampton upped the ante and put Liverpool under continued pressure. Luke Shaw's low cross from the left found Rickie Lambert unmarked on the edge of the box, but the striker couldn't connect properly, with his effort too high.

With 32 minutes on the clock, the Reds watched with relief as Lallana struck the foot of the post from Lambert's knockdown. The England international proved to be a nuisance again as he steered an effort wide a minute later.

There was a brief moment of pressure from the visitors, as Sturridge delivered a cross to Suarez, but the forward's first-time effort couldn't trouble Artur Boruc.

Morgan Schneiderlin scooped a shot over the bar after being fed by Calum Chambers before Simon Mignolet pulled off a strong save to thwart Rodriguez from close range ahead of the half-time interval.

Southampton continued their robust tempo after the break; Martin Skrtel blocked a Rodriguez shot after the striker cleverly held off Jon Flanagan. But the Reds started to impose themselves on the game again, with Suarez's lofted cross in from the left, in the direction of Henderson and Sturridge, being cut out by Boruc.

A tactical switch from Rodgers saw Sterling brought into the action in place of Coutinho. The winger, who has been in dazzling form for Liverpool, was tasked with running at Southampton, and helping to halt their surges forward.

His impact was immediate as his first touch produced the club's second goal. Gerrard spotted Suarez in space, the No.7 served up a super lay-off for Sterling, who tapped home at the far post. It was the fifth time that Liverpool's lethal marksman had assisted his younger colleague in the top flight during this campaign.

On 67 minutes, Suarez was at it again. He slipped Sturridge into space and the England international rounded Boruc, but the angle was too narrow for him to muster a shot on target. As Southampton ran out of steam - a consequence of their dynamic pace and the extra threat of the speedy Sterling - the Reds furiously pushed forward.

In a period of persistent pressure, Suarez won the ball from Lovren and made his way to goal, where he decided to pick out Sturridge. Fonte cut it out, and the top scorer failed with a second attempt to find his strike partner. Liverpool worked the ball back into the box and Henderson fired over.

Gerrard then sent a wonderful long drive goalwards, but Boruc managed to turn the effort around from the corner. From that set-piece, Suarez hit a potent delivery that needed a save to stop it from reflecting on the scoreboard.

Another corner for the Reds was played towards Henderson at the back post, but he skewed his volley wide. The midfielder then set up Suarez moments later, but his outside-of-the-boot effort went wide.

Fonte committed a late tug on Suarez in the box that earned Liverpool a penalty, which Gerrard wonderfully converted to complete an accomplished performance on the road and celebrate the Reds' rise to second.