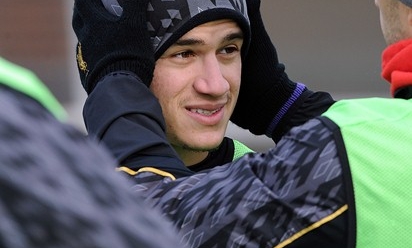 The Brazilian has been casting a watchful eye over Steven Gerrard in training at Melwood, observing the profuse talents of Liverpool's No.8.

The captain has been in outstanding form in recent weeks, as too has Coutinho, with both players laying on plenty of goalscoring opportunities for their teammates.

Indeed, Gerrard's exquisite over-the-top that allowed Daniel Sturridge to net at Fulham last month was one that even Liverpool's very own through-ball master Coutinho would have been proud of.

So, as two of the Barclays Premier League's best ball players, do they ever take the opportunity to discuss passing techniques?

"Not much, actually," Coutinho laughed when the question was put to him during a recent interview with Liverpoolfc.com at Melwood.

"As I always say, I try to observe him in training, his playing style.

"He's phenomenal and the way he connects with the ball is impressive.

"It's a pleasure for me to be playing alongside such good players, not only him but all the others we have in the squad. I try to make the most out of it."

Coutinho and Gerrard worked in perfect tandem during the recent demolitions of Everton and Arsenal at Anfield as Liverpool clocked up nine goals in two high-profile matches.

But the 21-year-old feels it's not just the players who deserve credit.

"Those matches against Arsenal and Everton were really impressive," he said. "The supporters were also spectacular. I've never seen something like that. I feel very happy for having been part of this moment.

"The fans supported us in everything we did against Arsenal. They became our 12th player and they were certainly our difference in that match.

"It gives you confidence when everybody is supporting you. It was really impressive."