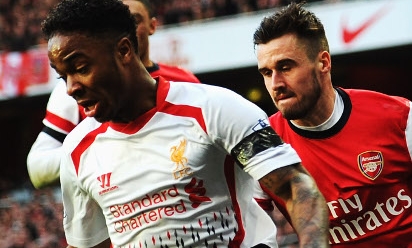 Allen and Agger back for Emirates clash

Liverpool could consider themselves unlucky to be knocked out of the 2013-14 FA Cup after Arsenal edged a hard-fought tie 2-1 at the Emirates Stadium on Sunday evening.

Alex Oxlade-Chamberlain broke the deadlock in North London with a close-range conversion following a pinball session inside the box, then the England international created a second for Lukas Podolski at the outset of the second half.

Steven Gerrard converted from 12 yards with a quarter of the encounter remaining to usher in a grandstand finish in a thrilling cup tie, but Arsene Wenger's outfit successfully soaked up huge pressure from the Reds during the time that remained.

Unsurprisingly, the opening opportunity of the match involved Daniel Sturridge, latching onto another precise Gerrard through ball in the first moments, but the No.15 was thwarted in his attempt to notch for a ninth consecutive fixture as Lukasz Fabianski blocked the shot.

On five minutes, the 24-year-old was presented with another inviting chance; this time, Luis Suarez dinked into space over the Arsenal defence for his strike partner. Collecting the pass, Sturridge quickly rounded the goalkeeper but his right-footer travelled wide of the near post.

Despite Liverpool's encouraging start, however, it was the hosts who registered on the scoresheet with 16 minutes played. A Mikel Arteta delivery into the area prompted a scramble and, when the ball finally drifted loose, Oxlade-Chamberlain pounced to power a low finish underneath Jones.

Suarez released Sturridge once more with a technically-superb volley out on the counter-attack, although the move broke down, then the Uruguayan whipped a troublesome cross from the right flank along the Arsenal six-yard box which narrowly eluded his colleagues.

It was the third attacking 'S' of Raheem Sterling who took matters into his own hands shortly after the half-hour, as he scurried around two markers from a congested zone near the left corner flag and looked to centre for a teammate - Mathieu Flamini recovered to block.

At the other end, centre-back Martin Skrtel was positioned correctly to deflect away a smash by Mesut Ozil following a lengthy dribble by the German, then Gerrard received the fifth caution of the first half to stop Oxlade-Chamberlain and a rapid Gunners counter-attack.

Fabianski was forced into full stretch by Suarez as the clock ticked towards the break, the Reds' No.7 lashing an angled volley towards the far corner from his right-hand berth. His subsequent ambitious lob carried off-target too and the hosts took a 1-0 lead into half-time.

Suarez was at the centre of the action within seconds of the second period beginning, when an instant turn of pace and control took the striker into space in the Arsenal area - but his toe-poked drive was denied by the outstretched boot of Fabianski.

And, almost immediately, it was 2-0. The home side burst forward, Oxlade-Chamberlain and Podolski completed a quickfire one-two and the latter wasted no time in expertly directing the return pass beyond Jones and into the net at lightning speed.

While the scoreline was not in their favour, Liverpool's performance suggested goals were possible, not least from Suarez, who rocketed another volley over the crossbar from Jon Flanagan's set-up. At the other end, Jones sprawled down quickly to thwart Ozil.

Sturridge created freedom for himself with a superb shimmy on the right corner of the Gunners' box but his curler was too central to trouble the 'keeper; the Reds would not have to wait long to breach the home backline, though.

Yet again, Suarez picked a direct path to goal and his dribble inside the area drew a clumsy foul by Podolski and the referee pointed to the spot. Gerrard took responsibility for the second time in four days and coolly side-footed into the bottom corner for 2-1.

Three minutes later, Kopites were convinced the equaliser had arrived when Philippe Coutinho and Sturridge linked with a trademark example of pass and move football, but Fabianski raced from his line to keep the striker at bay.

The in-form Arsenal stopper thwarted Coutinho after the Brazilian had connected with a typically incisive piece of distribution by Gerrard, as Rodgers' side mounted attack after attack in search of a strike which would level the score.

When the skipper delivered an accurate free-kick from distance straight to Agger with five minutes left, it seemed that the leveller had occurred - but the Danish defender's header drifted wide and Liverpool were consigned to a fifth-round exit.