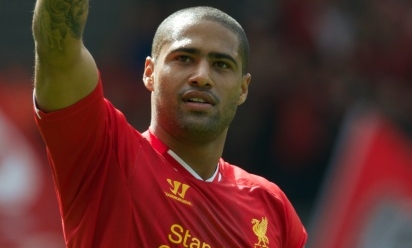 Brendan Rodgers has revealed Glen Johnson could be available for selection next week having returned to training at Melwood on Monday.

The full-back last featured for Liverpool during their pulsating clash against Aston Villa at Anfield on January 18.

Johnson played the full 90 minutes as the home team were held to a 2-2 draw; however, the 29-year-old has sat out the Reds' five subsequent fixtures.

Speaking to reporters at Melwood ahead of his side's trip to the Emirates Stadium to face Arsenal on Sunday, Rodgers revealed that the defender is making good progress.

However, the manager also explained how Johnson will be a doubt for the weekend's FA Cup fifth-round clash in the capital.

Speaking on any potential team news ahead of the fixture, Rodgers said: "We'll be similar to what we were the other night [against Fulham].

"Glen Johnson is working very well. I'm not sure he'll be ready for the game this weekend, but if we can have a good week next week he'll be very close.

"He looks fresher and he looks fitter. That period that he's had out has really helped him. He's in good condition. But there is still a bit to go yet. Daniel Agger is back in the squad and it's as it was really."