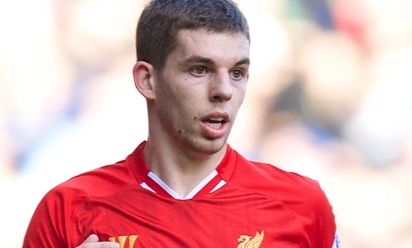 Jon Flanagan believes the support of the Anfield crowd can help Liverpool maintain their fantastic form on home turf this season when they take on Barclays Premier League leaders Arsenal on Saturday.

Brendan Rodgers' charges go into the game eight points behind Arsene Wenger's men, but boast an exemplary record in front of the Kop.

The Reds have lost just one of their last 18 games at Anfield and Flanagan insists the players are determined to continue making their home venue a fortress.

"We are enjoying playing at home in front of our fans," Flanagan told Liverpoolfc.com.

"We are playing really well at home and hopefully we can go out and get a result on Saturday.

"Our fans are going to be massive again for us. They have got to play their part as they always do, but on Saturday we'll be ready and hopefully we can get the win.

"All of the team are working hard just to get the results. We know how important the top four is for this club to be in, but we are just working hard and we hope that can continue."

Liverpool's No.38 points to the deadly duo of Luis Suarez and Daniel Sturridge as a reason why the Reds don't fear the visit of the league leaders tomorrow.

The young Scouser hopes the pair can continue their awesome form in front of goal, which has seen them fire 37 goals between them in 35 games this season.

He added: "With the players we have we are always confident. Our front players are just in great form and we think we can break them down defensively."

Saturday's meeting is the first of two clashes against Arsene Wenger's side in the space of a week, with the FA Cup fifth-round clash at the Emirates on February 16.

Sandwiched in between is a trip to Fulham, and Flanagan insists he relishes these type of games. He said: "They are massive games. We are going out to win all three of them.

"If we want to get into the top four we have got to push on now and hopefully get something out of Arsenal then hopefully take three points at Fulham on Wednesday.

"We will prepare right as always. For myself personally I have got to get in the zone, try not to make many mistakes and not let anyone down."