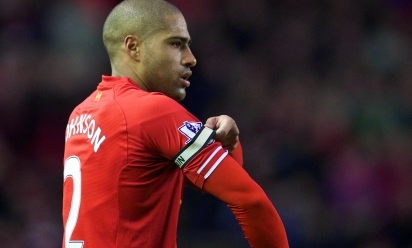 Brendan Rodgers today confirmed Liverpool are set to be without the services of Glen Johnson for a period of time, while Lucas Leiva is expected to be out for 'a few months'.

The boss revealed the Reds' No.2 has been struggling with injuries in recent weeks and now faces an indefinite stint on the sidelines.

Meanwhile, Lucas picked up a knee problem against Aston Villa last weekend and will be out of action for a 'couple of months'.

There was better news for Liverpool, however, as Jon Flanagan resumed full training at Melwood this week.

Rodgers told a pre-Bournemouth press conference: "We've got a few that have been ill this week, and one or two that have been struggling with injury.

"Our latest one is Glen Johnson. Glen has played a lot of the season having been injured and really put himself out for the team, but unfortunately he's struggled a lot with a number of injuries.

"The timeline he'll be out will be indefinitely, really. We'll just need to assess that and see how quickly he comes through that.

"Apart from that, it's where we were. We have one or two coming back; young Jon Flanagan is back into the squad and has been training really well. But we've still got one or two that are out."

Expanding on the news regarding Johnson, Rodgers added: "He's had a real bad ankle for a period of time, and just one or two other issues that haven't allowed him to be 100 per cent.

"I think everyone has seen over many years the speed, fluency and how good he's been, but for part of this season he's been restricted and that's obviously been difficult for him.

"But he's put himself out for the team to train and to play, and I just think it's now at that point where we need to get him right.

"There's no timeline on it. We just need to assess it and we'll take it from there."

Meanwhile, Rodgers spoke of his confidence that Lucas can return from his knee injury ahead of schedule.

He said: "First of all, personally I am disappointed for Lucas because he's been very, very important for our squad this season. It was something that was innocuous really and has put him out for a few months.

"Hopefully he'll get back sooner rather than later.

"He'd been in good form this season and had worked his way back into the Brazil squad. Knowing what he is like, he'll be back sooner rather than later - and he'll do everything in his power to get back.

"In the meantime, that leaves us short of a really good player."

Reporters asked Rodgers how this injury would affect Lucas's chances of representing his native Brazil at this summer's World Cup finals in his home country.

"I'm sure Luiz Felipe Scolari will have a real good idea of who he is going to bring anyway and I don't think this injury for Lucas will deter that," replied the manager.

"They've got their last squad get together in March. He was in the last one and I'm sure he impressed.

"They've got a big pool to pick from there, a lot of players, but I'm sure he has an idea of who he wants to pick already."

As well as Johnson, Lucas and Flanagan, Liverpool have also been without Mamadou Sakho, Jose Enrique and Daniel Agger due to injury recently.

"We've got to work hard at getting some of these players back fit," concluded Rodgers.

"We spoke to the injured players this morning and told them we're moving into a really important period, and they're very important to what we're trying to achieve here. I want them to work tirelessly now and even harder to get back as quick as they possibly can. The squad needs them.

"Their reaction was great. We're all in it together, we've just been very unfortunate with injuries to key players - the likes of Lucas adds to that.

"But we just have to manage with what we've got. That's what we'll look to do and if we can bring any [players] in then great, and if not then we have what we have."