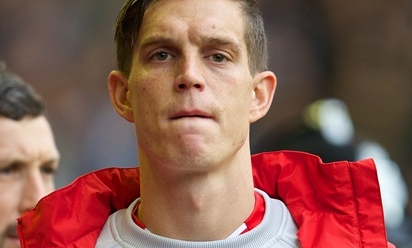 Youth Cup fifth round draw made

Brendan Rodgers has revealed that defender Daniel Agger is likely to miss 'three to four weeks' with a calf injury, but delivered positive updates on the fitness of Mamadou Sakho and Daniel Sturridge.

Liverpool's vice-captain limped off the field 10 minutes before the end of the Reds' 2-0 victory over Oldham Athletic in the FA Cup last Sunday, and will now spend a short period on the sidelines.

The Northern Irishman will welcome French centre-back Sakho into the squad for this weekend's trip to Stoke City, however, and shared his pleasure with the return of Sturridge to training at Melwood.

"Daniel [Agger] will probably be three to four weeks," Rodgers told reporters on Friday. "Unfortunately he has picked up a calf problem, so he will be out for a while.

"Thankfully, we have now got players starting to come back. Steven [Gerrard] is back, which is great news for us. Daniel Sturridge has been training this week and looking very well.

"Young Sakho trained today so he looks fine to be in the squad for the weekend.

"Jon Flanagan has still got a bit of time to go. Jose Enrique is still out. We've got a couple of niggles which we'll have to look at over the course of the next 24 hours. But we'll certainly have one or two back."

Sturridge has not featured for the Reds since notching a dramatic equaliser in the Merseyside derby at Everton on November 23, after suffering an ankle problem in training.

The manager stopped short of suggesting that the England international could return at the Britannia Stadium on Sunday, but praised the No.15's desire to make a comeback.

"We'll see over the next 24 hours," Rodgers responded when asked if the striker will be included at Stoke.

"He has made a terrific impact since he came in here, he has been outstanding. We're working hard with him and his talent to try to really allow that to flourish.

"Over the last four to five weeks it has obviously been difficult for us with injuries and the fitness of the squad.

"But just seeing him on the training field in the last couple of days has been really good - someone of that stature and quality out there. To have that back in your group again gives you great firepower.

"Daniel missed all of our pre-season, came back in having only trained 10 days or so, then started off the season and was outstanding.

"The make-up of his body is really good; he doesn't put on weight, he has looked after himself really well and he looks at a really good level fitness-wise.

"We'll assess that over the next 24 hours. We don't need to rush him, we want to make sure he's going to be ready to make an impact in the second part of the season."