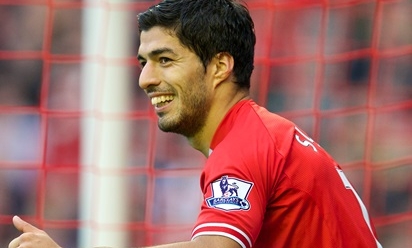 Show your support for Ladies star

Top scorer in the Barclays Premier League he may be, but ask Luis Suarez for the secret to Liverpool's attacking success in 2013-14 and the Uruguayan insists combination is the key to creativity.

The Reds' No.7 has quickly notched 20 goals in 15 Premier League fixtures this season, leading the scoring charts in the division and aiding Brendan Rodgers' team in battling for a top-four place.

At times the forward has swept all before him - not least with his four strikes in a single match, at home to Norwich City - and yesterday was announced as the Standard Chartered Player of the Month for the third consecutive time.

Of course, he hasn't done it all himself; in tandem, the likes of Philippe Coutinho, Steven Gerrard, Jordan Henderson, Raheem Sterling and Daniel Sturridge have formed an aesthetically pleasing group.

Suarez himself is wholly aware of the gratitude he owes those who toil in behind him and the 26-year-old has extended his appreciation all the way back to the defence and goalkeeper too.

"Last year, we knew we could play better," the striker explained to Liverpoolfc.com.

"This season we try to play together more, with Raheem, Philippe and Daniel, now he is back. Jordan and Stevie help us in the box.

"But also, if we didn't have a really good defence or very good goalkeeper, you can't stay at that level. We are together and that is important."

The Uruguay international has partnered with Sturridge to terrify defences across the country since the latter completed a switch to Merseyside during the January transfer window of 2013.

On Friday, Rodgers shared the news that the striker had returned to full training at Melwood - and Suarez explained why the No.15's comeback could arrive at the perfect time for the club.

"It's very good," he commented. "Daniel is very important for us and the last few weeks have been very difficult for him with the injury.

"But I think he is happy because Liverpool won games and now he is back at a good moment for us, because he helps the team so much."

While Liverpool have won eight consecutive matches on home soil in all competitions, claiming three points on their travels has proved more challenging so far - with a trio of victories to boast.

Neither have the Reds returned from the Britannia Stadium in the Premier League era celebrating a triumph, but Suarez is of the belief that the club's supporters can play a part in overturning that record.

He continued: "We know every week is difficult. We work very hard for every game and we know we now have a very difficult game against Stoke away.

"They are strong there; we'll try our best to win the game. Confidence for the next two or three games is important after a week's break.

"If we stay together, we can keep going for the next game. That's very good for us and for the supporters also.

"When we have very good support, it's important for confidence on the pitch. All of the players try their best to win every game."