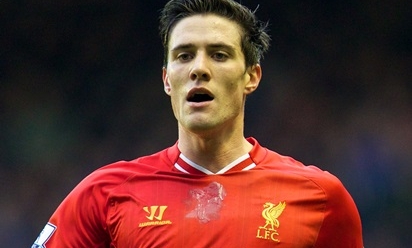 The Oldham win in action and reaction

Having admitted to feeling nerves before taking to the field against Oldham Athletic on Sunday, Liverpool defender Martin Kelly described his return to the starting line-up as 'brilliant'.

The 23-year-old completed the whole 90 minutes at Anfield as the Reds secured a 2-0 victory in the FA Cup third round and a meeting with either Bournemouth or Burton Albion at the next stage.

Brendan Rodgers named Kelly in his team for the first time since September 23, 2012 - when the No.34 suffered an anterior cruciate ligament rupture in his right knee.

Following 15 months of hard work and rehabilitation, the full-back was able to reflect on the sheer pleasure of featuring for an entire senior match and optimistically target more in the second half of the season.

He told Liverpoolfc.com: "It was brilliant. I was probably more nervous for this match than any I've ever played for Liverpool, because after 15 months that was my first start.

"It was great to get that behind me, getting up and down the line. I was getting cramp in my calf about 65 minutes in, but it was brilliant for me to get 90 minutes.

"A good cup run, for me, is vital in terms of games. I've been getting them this season due to no Europa League. We can just keep going in the cup games and we're doing well in the Premier League.

"We did what was needed, we got through to the next round. It was a good, strong performance overall from the lads."

With no European football for Liverpool in 2013-14, Rodgers' side are battling on dual fronts - competing at the top of the Barclays Premier League and aiming for an eighth FA Cup triumph.

The Reds can now look forward to a fourth-round tie on the final weekend of January with a winning mentality freshly instilled by the manager, according to Kelly.

"Any opponents we face are going to be difficult. We've just got to take that game when it comes," he said of the encounter awaiting his teammates.

"We'll try our best and go out and give respect to the team we play. It's away so they'll have their fans behind them, we'll have our travelling fans. We'll put on the performance that's needed.

"As a Liverpool player you want to win every competition - that's the mentality we've got under Brendan.

"We're all working well together as a team, enjoying our football every day when we come to work. It's good and we're showing the fans what they want to see."