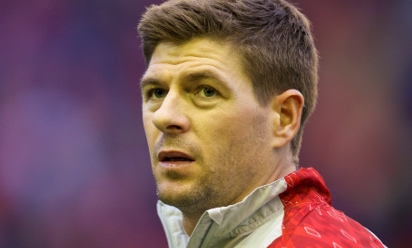 Mignolet: Vital we got back on track

Brendan Rodgers expressed his delight at Steven Gerrard's return to action against Hull City – and paid tribute to the manner in which the skipper set about recovering from injury.

Anfield rose to its feet to welcome the 33-year-old onto the turf after a four-week absence during the New Year's Day win over the Tigers.

A hamstring injury had ruled the captain out of crunch clashes on the road against Tottenham Hotspur, Manchester City and Chelsea.

However, Gerrard featured for half an hour after replacing Iago Aspas during the Reds' 2-0 victory - and Rodgers has backed him to reach full fitness over the coming weeks.

"It's vitally important to have Steven back," the manager told Liverpoolfc.com. "His influence in the team is critical for us.

"He's worked tirelessly to get back having been out. We just wanted to get him some minutes on the pitch.

"He wasn't ready to start the game, but his influence back in the team gives us another player of real quality.

"Over the course of the next 10 days, he'll get right up to speed and it's great to have him back."

Gerrard helped guide the Reds to a seventh consecutive victory in L4 on an afternoon when Daniel Agger and Luis Suarez handed them a winning start to the New Year.

A total of 26 goals have been scored on home soil in the league this season - and Rodgers believes bolstering Anfield's reputation as a fortress in 2014 will be the key to achieving success.

"I said when I came in here that I wanted to make it very difficult for opponents," said the boss. "If you're going to win anything, it comes on the back of, first and foremost, your home form and we've grown to love playing here again.

"This was a place where maybe teams could come to and fancy themselves to get a victory. But I think we've shown over these last 18 months that coming to Anfield now is a really difficult task.

"When we play here, with the backing and the great support, we expect to win. That's not being arrogant - it's just what good teams do; win their home games and thankfully we've won today.

"The win came off the back of a tough period of games and so to have nine points out of the last 15, including three difficult away games in Tottenham, Manchester City and Chelsea, I thought it was a great effort by the team."

The January transfer window is now officially open and the manager was quizzed as to his plans for movements in the market.

He replied: "We've just got to see what's available. We know that we would like to strengthen the squad for the run in.

"So we just need to see what's available and what that's going to cost, basically. There's no point in just stockpiling players for the sake of it. We need to bring in players of quality and hopefully we can do that."