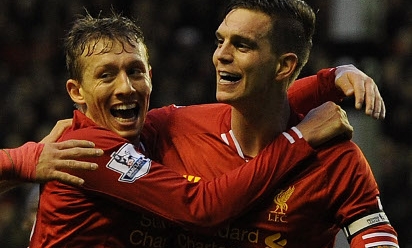 The Hull win in action and reaction

Daniel Agger acknowledged that he joined an elite club when he captained Liverpool at Anfield on Wednesday, but the Danish defender was equally preoccupied with ensuring his side claimed three points.

The Reds' No.5 broke the deadlock against Hull City by nodding home a Philippe Coutinho corner, laying the foundation for a Luis Suarez free-kick to seal a 2-0 victory and a return to the Barclays Premier League top four.

Steven Gerrard was deemed fit enough to be named among the substitutes for the visit of the Tigers, following a month out with a hamstring strain; Agger, therefore, wore the armband on home soil for the first time.

Leading Liverpool out on their own turf was an experience the calm and collected centre-half described as 'a big thing', but his primary focus was sending supporters home happy on New Year's Day.

He told Liverpoolfc.com: "It's something that not many players do in their career - so it was obviously a big thing for me.

"But the most important thing was the three points, it's as simple as that. Not only for confidence but to stay at the top is so important, to hang in there. We did that.

"For a defender a clean sheet is the most important. It wasn't our best performance but if we can win and get three points without playing at our best, that's important - especially in the long run."

The manager, Brendan Rodgers, suggested after the final whistle that the win over Hull was Liverpool's best victory of the season - would Agger agree with that assessment?

"Yes," he responded. "Because of the way we played and also we kept the clean sheet against a team that scored six in their last game."

The 29-year-old featured at left-back in the clash with Chelsea at Stamford Bridge last Sunday; yesterday, he was fielded in a central position as Mamadou Sakho was ruled out through injury.

Fortunately, the boss can boast a wealth of defensive options within his squad, a situation the Northern Irishman's vice-captain insisted is crucial for a club with serious ambitions.

"If you want to be at the top, there has to be competition for every place in the team. That's important, especially at a club like this," Agger concluded.