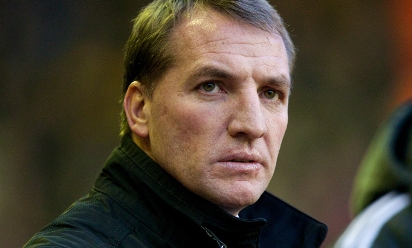 Agger and Suarez start 2014 with win

Brendan Rodgers hailed Liverpool's New Year's Day victory over Hull City as his side's 'best win of the season' after goals from Daniel Agger and Luis Suarez secured a 2-0 success at Anfield.

Agger headed in the opener on 37 minutes, rising highest in a crowded area to nod home Philippe Coutinho's corner.

Suarez claimed a second for Liverpool shortly after the break, curling home a trademark free-kick from distance to seal the win.

It was a result that moved the Reds up to fourth in the Barclays Premier League table and one that left Rodgers hugely satisfied.

"I said to the players afterwards that I thought that was our best win of the season," the manager told his post-match press conference.

"In a lot of games we've been vibrant with great energy, scored goals and performed well, as well as won.

"But on the back of the games that we've had over this period - and to play with a lot of the same players against a team that won their last Barclays Premier League game 6-0 - we knew we were going to have to tough it out today and dig in.

"We might not have always been at our best, but we got two great goals, had other opportunities and actually restricted Hull to no shots on target.

"I'm very, very pleased with today because it was a great victory for us."

Suarez's free-kick was his 20th goal of the season so far - but Rodgers revealed the Uruguayan had to play through the pain barrier in order to line up against the Tigers.

He said: "Today was very much about the team. Luis will, of course, always get the plaudits because he's a world-class player.

"Nine out of 10 players would not have played today. He had a real bad knock on the top of his foot from the Chelsea game. I know, having managed and worked with players, that most players wouldn't have played with what he had today.

"He had strapping on it and he put himself out there for the team yet again. That's why he gets the goals that he does, because he's so determined.

"But it was very much a team effort today. It was a great header from Daniel Agger from the corner and that set us off."

Coutinho could have given Liverpool an even healthier advantage when the Brazilian embarked on a mazy dribble towards goal from inside his own half, only to see his final effort saved by Allan McGregor.

"He's played in all of the games and for a little guy, his strength has been incredible," reflected Rodgers. "I think everyone wished that one at the end had gone in!

"He's shooting, he's really positive, he's aggressive and it was a wonderful bit of skill there at the end that could have been capped off with a goal. He just needs to learn how to put the ball in the net."

Another bonus for Liverpool was a first clean sheet since the 5-0 win at Tottenham Hotspur on December 15 - their second in nine matches.

"It is important, but there's no good having 15 clean sheets if you can't score!" said Rodgers. "So it's about getting the balance in the team.

"Of course, you don't want to concede soft goals and thankfully we didn't. We worked tirelessly today to stop them getting anything - they had no shots on target.

"[Clean sheets] are important, but the most important thing is the victory and the goals. We got that today."