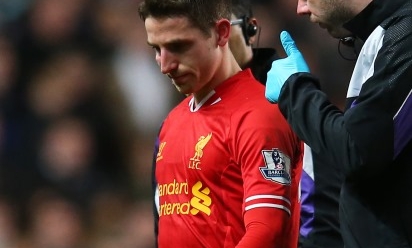 Rodgers: All to play for in second half

Joe Allen and Mamadou Sakho will need to be assessed ahead of Liverpool's next fixture after the pair each picked up an injury during the Reds' 2-1 defeat by Chelsea on Sunday.

Allen was replaced by debutant Brad Smith on the hour mark, while his French teammate was withdrawn in the final moments at Stamford Bridge with a hamstring issue.

Brendan Rodgers' side saw an early advantage, gained by Martin Skrtel, turned around by the Londoners and dropped to fifth in the Barclays Premier League standings.

Afterwards, the boss provided an update on the condition of his squad before their final match of the hectic festive schedule - at home to Hull City on January 1.

"Sakho is his hamstring, so he will probably be a bit of time - we'll find out tomorrow," Rodgers told reporters.

"Joe Allen and Jordan Henderson probably played at 70 per cent, they were both injured. Joe had an injection to try to quash the pain in his abductor.

"Eventually when that wore off, it went really. We'll see how long that will be. We'll obviously assess Jordan as well."