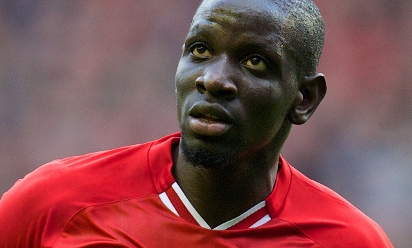 Mamadou Sakho has called on Liverpool to shatter Manchester City's formidable home record with a victory at the Etihad Stadium on Boxing Day.

The last time City lost on home turf was during a 3-2 reverse to Norwich City on the final day of the 2012-13 campaign in May.

Manuel Pellegrini's men have since won every game in front of their own fans this season, netting an astonishing 32 goals in eight games.

However, Liverpool's powerful Parisian, Sakho, is not daunted by the statistics - and he insists records like City's are there to be broken.

"That's great for them if they have a great home record, but football nowadays is all about turning form and records around," Sakho told Liverpoolfc.com.

"The key for me quite simply is to be determined and confident in ourselves and I hope we will go there to try and put an end to that home record.

"The aim is to try and win every match, whether it's here or at their place, so we'll try and go there determined and ready for the fight and try and win. It's as simple as that.

"I think that when everyone is pulling in the same direction, you can move mountains."

Seven of City's 32 goals came against Norwich in early November, before Arsenal and Tottenham Hotspur were both ruthlessly hit for six at the Etihad.

However, Liverpool's last fixture on the road saw them thrash Spurs 5-0 - and Sakho believes the result at White Hart Lane will fill his teammates with confidence ahead of City.

"I think that result showed that we could put in a big performance," he said.  "We have to enjoy that victory but then put it into perspective - not all away games are the same. Each opponent is different and this is a very tough league.

"But of course there will now be a level of expectation from everyone when Liverpool play away. I just hope we can get as many positive results as we can.

"I think that we have nothing to be envious about in any of the teams in this league. They have their qualities and we have ours but apart from that, the key is to focus on all that's positive about ourselves, concentrate on our game and be sure of our own strengths."

Key to City's impressive form, both home and away this season, has been Sergio Aguero, who is second only to Luis Suarez in the league's leading goalscorer chart.

The lethal Argentinian is currently sidelined due to a calf injury he picked up during City's 6-3 win over Arsenal on December 14 and will play no part in the Boxing Day clash.

However, Sakho, who will be hoping to lock horns with Aguero's replacement, insists the opposition have enough quality within their ranks to cope without the frontman.

"We know that City have a lot of quality players apart from him," said the Frenchman. "We need to concentrate on our own game and our own group of players and at the same time not disregard them.

"Yes they have shown good home form but to tell you the truth, I don't pay too much attention to opponents, whether it's City or anyone."