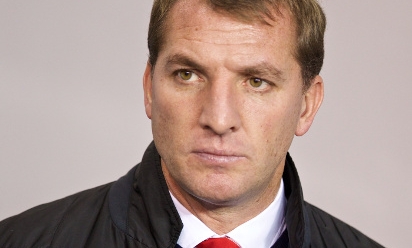 Brendan Rodgers hailed a 'complete performance' by his Liverpool team after the Reds leaped into second place in the Barclays Premier League with a remarkable 5-0 victory over Tottenham Hotspur.

The Northern Irishman's charges outplayed and outmuscled the North London outfit, with a brace from Luis Suarez and strikes by Jordan Henderson, Jon Flanagan and Raheem Sterling producing an historic result.

Afterwards, the boss - who has now watched his team win three consecutive matches in the Premier League - lauded the contribution of his whole side, with particular focus on the level of confidence on show.

"It was probably the most complete performance, to come here and get a victory like that," he told reporters when asked if it was his side's finest display since he took charge.

"I loved our arrogance today. The arrogance with the ball was very good - lots of angles, lots of people moving and interchanging positions. We looked a real threat whilst retaining that solidity in defensive shapes. It was very good.

"The model of our game today was outstanding. We were like animals without the ball, how we pressed, and our hunger for the football was great. Once we got it, the use of the ball was outstanding. It was a complete performance and a big victory for us.

"In football, it is very hard to sustain that level. We have had a lot of first-half performances that have been exceptional and sometimes it just tailed off in the second half, which is natural in the game.

"We knew today we had to retain our focus; Tottenham have an outstanding squad here, with a lot of talented players. If you lose your concentration, you can concede.

"Our concentration was good defensively - we had good shape to our team, the organisation was very good from the players when they pressed.

"What really pleased me was when they went to 10 men, how tactically we opened up the pitch with the ball but also pressed even harder to get the ball back.

"We work on overloads in training when you have the man advantage, and I thought we saw that through very well. We scored five and maybe could have had seven or eight."

With Steven Gerrard out injured and vice-captain Daniel Agger selected among the substitutes on Sunday, Rodgers named the prolific Suarez as the Reds' skipper at White Hart Lane.

The Uruguayan responded with another immaculate brace, increasing his Premier League tally for the campaign to 17 goals in just 11 appearances. The manager admitted he has run out of superlatives. 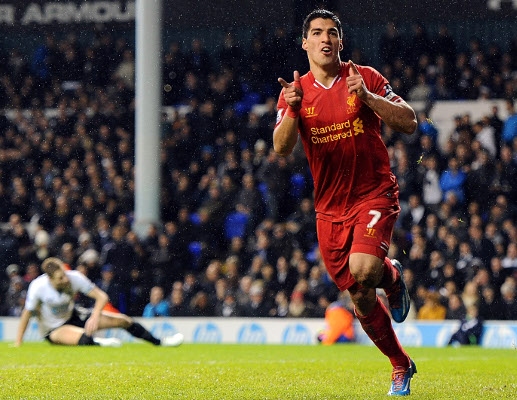 Explaining his decision, Rodgers continued: "He has captained one of the most iconic clubs in European football, in Ajax - so it's not new to him.

"With the players that were out, what I wanted to do was have someone who could represent me and the club in that tunnel, before we even step onto the pitch.

"When Luis Suarez has the armband on and is stood waiting to go out, everybody knows this is a team that is ready to fight. He was great in the changing room, I think he enjoyed it.

"I spoke to him a few days back, saying that I wanted him to lead this club, one of the biggest clubs in the world, and it's an honour for him to do it.

"He has really enjoyed it and you saw his performance - he is always encouraging for young players, but he is relentless in his work. His quality and his goals were fantastic."

Equally impressive throughout the 90 minutes was midfielder Henderson, who bestrode the Tottenham stadium with immense confidence and capped his performance with a deserved goal.

"You just put it down to him," said the manager. "When I came into the club, I had always heard he had a brilliant attitude to learn - that's what I've found since I have come in.

"I think it was a great buy by Kenny [Dalglish] to bring a player of that quality in. As a young player that's hungry to learn - he's 23 years of age, he's 6ft1in and he can run all day, he's technically very strong, tactically he is understanding when to press and when to drop in.

"His goal, technically, was a wonderful goal. He's a terrific player, he just needs confidence and constant work. He has been outstanding for me.

"When we have that focus and concentration, we're a very good side. Jordan is a mentally tough boy, he's so strong, and such a humble kid as well. He's only going to get better and better."

Perhaps the most surprising name on the scoresheet was that of Flanagan, who met a back-post cross with a well-aimed finish to make it 3-0 with a quarter of an hour left on the clock.

Rodgers reiterated his appreciation for the hard-working defender and expanded on why the No.38 should be credited for battling his way into first-team contention during the past six weeks.

"There was only one club who came in for him on loan, a League One club. No-one wanted to take him on loan," said the 40-year-old.

"I thought going back a few games, when he got into the team against Everton, that this was a kid who can handle it. Since he came in and played in the derby - and was man of the match against Everton - he has been fantastic.

"His confidence is growing and growing all the time. His goal was a brilliant finish; I'm delighted for him. As a local boy, you could see how much it meant to him and the supporters."

With the result over Spurs, Liverpool closed the gap to Premier League leaders Arsenal to just two points - and the boss was naturally asked whether his team can challenge for the championship.

He responded: "I'm not even thinking about that, to be honest. My job was to try to develop the style of football, whilst moving the club forward.

"What we've tried to do is move every aspect of the club forward. Obviously you dream and I didn't come here to be fourth or third or second - eventually you want to win, but you've got to be realistic as well. Last year we were seventh.

"If we can stay clear of injury and just continue to improve our football and what we're trying to do, let's see where it takes us."