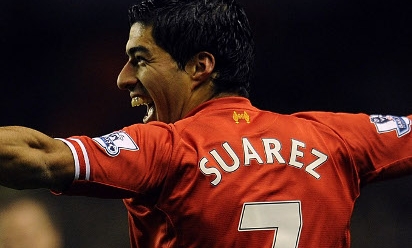 Luis Suarez shook the Kop to its core to etch his name into the Liverpool history books on Wednesday night - and then highlighted three points as the pinnacle of his evening's work.

The Uruguayan returned to haunt Norwich once again, and even produced a strike reminiscent of his stunning Carrow Road lob of last year to open the scoring.

He tucked away Steven Gerrard's flick to double up, rocketed home from the edge of the box for three, before whipping a free-kick past John Ruddy to claim a fourth.

However, afterwards, the deadly No.7 insisted banishing memories of a disappointing defeat by Hull was paramount on the night.

"The most important thing was that we won," Suarez told Liverpoolfc.com. "I helped the team and I am so happy.

"It was very important to get the result because we lost the last game and we didn't play very well.

"We know that when we play here and we're at home, we can be strong and we have to win. I think it was important."

Suarez's majestic first-half treble against the Canaries meant he became the first Liverpool player in history to notch a hat-trick of hat-tricks against an opposing club.

The 26-year-old netted six times at Carrow Road during 2012 to claim two trebles; however, he was unaware of the chance to make history with a third, prior to last night's match at Anfield.

"Before the game I did not know about that, but afterwards some of the players told me," said Suarez. "It's good for me, for my future and for my history. But I think for the club it will give us confidence for the next game.

"When I play [against Norwich], I don't feel a difference - I think today is a lucky day and the most important thing is that I tried to help the team. Today I scored, but the performance of the team was very good."

Suarez led the line capably in the absence of his strike partner Daniel Sturridge - and fired four goals to claim top spot in the Barclays Premier League goalscoring charts.

The Reds are likely to be without Sturridge until mid-January due to an ankle injury, but Suarez insists the onus is on the team to step up in his absence.

"The responsibility is with the squad," he explained. "I know I am the striker and I'll try for the team.

"But I think that we have so many players who can help the team going forward. We'll miss Daniel, but we'll try to do well without him."

Relive Luis Suarez's incredible, four-goal performance against Norwich City – including his wonder strikes from 10 angles, LFCCTV plus a compilation of his trebles past the Canaries – by becoming an LFC TV Online subscriber. Click here for more information.