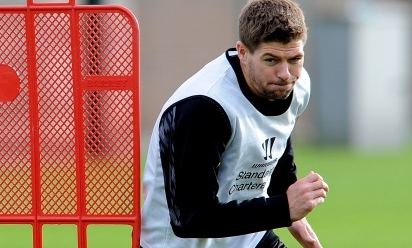 'These have been the best 15 years'

Steven Gerrard has challenged his Liverpool teammates to adopt a 'ruthless' mentality during the next seven days in an attempt to build a platform in their bid for Champions League qualification.

Seven wins from 12 Barclays Premier League fixtures to open the campaign have ensured a top-four berth for Brendan Rodgers' side throughout the fledgling weeks and months of the season.

December poses a mammoth challenge in more than one sense, though, with seven matches to navigate during the month - including heavyweight encounters at Tottenham, Manchester City and Chelsea.

Gerrard has therefore called on his side to claim maximum points from three quick-fire games in the coming week to remain on course to achieve the objectives set by the manager in pre-season.

The captain told Liverpoolfc.com: "We have got three games in seven days now and we've got to try to take maximum points. They are the games, on paper, that we should be winning.

"If we want to achieve at the end of the season what we set out to do, we've got to be ruthless over the next seven days. Then we can look at what's in store towards the middle and end of December.

"Every month is pivotal and every game is pivotal. But we play a lot of games in a short space of time and there are some really big tests - going away to City, Chelsea and Tottenham are going to be huge games.

"If we show the form that we showed in the second half of last season, then we'll finish in the top four. That's the challenge for us - can we finish this season like we did last year? Can we show that form?

"When teams come to Anfield, we're ruthless and win games comfortably. Then can we go away and be strong and resolute and nick big, important wins on the road?

"If we can do that, Champions League football will be back here next year. And myself and everyone connected with the club will be very happy. That's the challenge."

The Reds have not crossed swords with Hull City in a competitive encounter for more than three years, but will renew acquaintances in the Premier League on Sunday afternoon at the KC Stadium.

Gerrard insisted that the diligence carried out at Melwood means the newly-promoted Tigers will not be an unknown quantity, but at the same time warned against any complacency on matchday.

"That's the risk and that's the warning that the manager keeps telling us - don't get too carried away after a win, but don't get too down after a draw or a defeat," he added.

"Everyone is taking points off everyone. We're in a wonderful position, we've started the season really well.

"We've got a healthy squad besides a couple of little niggles that will be back really soon. Fingers crossed, things are good and hopefully we'll stay there until the end of the season.

"We've got a great analysis team here at Liverpool and great staff that don't let anything go unnoticed. We'll be really prepared for this game; there will be no excuses, we're going there to win the game.

"We'll know what Hull are all about when it comes to kick-off. We need to try to take maximum points from this game. It's going to be tough.

"They have started the season reasonably well, they are playing a compact style of football where they are not giving many chances away and have drawn a lot of games 0-0.

"But let's see if they can keep a clean sheet and keep us quiet with the firepower we're showing at the moment."