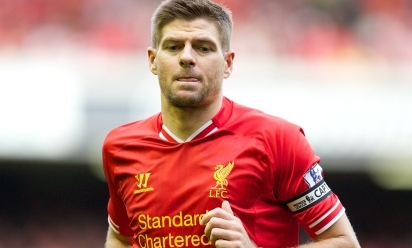 Suarez: What I'd swap my goals for

On the day that Liverpool supporters around the world paused to pay tribute to Steven Gerrard on the 15th anniversary since his debut for the club, the captain declared the past decade-and-a-half as the best years of his life.

As the final seconds of a 2-0 victory over Blackburn Rovers on November 29, 1998 ticked away, then Reds boss Gerard Houllier called for a substitution which set in motion the finest Anfield career in modern history.

Defender Vegard Heggem departed the scene to be replaced by a youngster who would graduate to become skipper within five years and subsequently lift the Champions League trophy for Liverpool.

The No.8 has now made a total of 644 appearances for the Reds, providing a remarkable 161 goals from midfield - a legacy yet to be finalised which fills Gerrard with immense pride at the mere thought.

"I wouldn't change the last 15 years for anything in the world - they have been the best 15 years of my life," he explained to Liverpoolfc.com on the day of his anniversary.

"I was reminded a couple of days ago that we were coming up to this landmark. It made me feel really proud but also very old as well.

"The dream for me back then was just to try to play as many games as possible. As you're playing along and the years go by, you forget about time and enjoy yourself and try to make the most of your career.

"You only have to look at the pictures to see the difference. Back then, I wasn't ready for football at this level.

"You could see by my frame that I still had a lot of development, to try to become more powerful and ready for competing with grown men. I was still a young kid back then.

"Now I have physically developed; with time and all the hard work that goes in, you grow and become physically ready. That's the difference I've noticed when looking back at the pictures."

Reaping the rewards of an individual training regime implemented by Brendan Rodgers and his staff, Gerrard narrowly missed out on completing an ever-present Barclays Premier League campaign in 2012-13.

Such longevity at the age of 33 has prompted expectations that the Huyton native could extend his playing career comfortably; for now, though, he is limiting his focus to simply the next match on the schedule.

"I take it season by season now," added the Englishman. "I'm very focused on what's going on this season - we have got ourselves into a really good position.

"I don't think about what's going to happen in three, four or five years' time. The focus is trying to get three points against Hull, that's how short my focus is and how I plan my weeks."