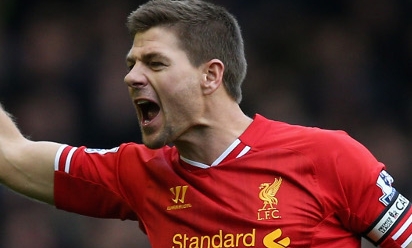 Amidst the breathless action of the 221st Merseyside derby on Saturday, one player stood head and shoulders above the others in the opinion of Liverpool captain Steven Gerrard – defender Jon Flanagan.

The 20-year-old was handed his first experience of playing rivals Everton, with Reds manager Brendan Rodgers selecting the Scouser at left-back in the absence of the injured Jose Enrique.

Flanagan responded with an assured and composed performance at Goodison Park, regularly stifling counter-attacks from the Blues and calmly distributing possession when called upon.

His contribution certainly caught the eye of his skipper, who revealed that the squad awarded the No.38 with a round of applause when he returned to the away dressing room after the final whistle.

Gerrard told the Liverpool Echo: "You look at our team and our star man, for me, was Jon Flanagan by a country mile.

"He doesn't get many headlines but, as captain of the team, he was the player I am most proud of. I thought he was unbelievable.

"He's been fighting hard in training just to get in the 18, never mind the starting XI, but the manager threw him in at the deep end against a top-class player like Kevin Mirallas and I thought he was sensational.

"It was one of the best derby performances I have seen for many years. He reminds me of Jamie Carragher in a lot of ways. I don't think you would judge Jon in terms of ability or skill, but he is all about heart, desire, determination and fighting for the cause.

"He's a Liverpool fan like myself, so I know what it meant to him to come into a derby and finish as our man of the match by a mile.

"I didn't have to say anything to Jon before the game. He's a local lad and you don't need to tell them what the derby means. He's known what to expect from an early age.

"Jon was on the front foot, he was aggressive. He did exactly what the manager told him to do before kick-off. He asked him to be positive and anticipate the danger. He was brilliant.

"All of the players gave him a round of applause when he came in the dressing room afterwards."

Gerrard was involved in two of Liverpool's three goals at the weekend, delivering the corner which led to Philippe Coutinho's opener and directly assisting Daniel Sturridge's dramatic equaliser.

The 33-year-old felt this latest meeting of the foes from either side of Stanley Park differed to derbies in previous years and insisted that a point was a reasonable outcome for the Reds.

"I thought Everton were slightly different in this derby. They tried to play a bit more," the No.8 continued.

"That's what their manager is trying to do and it's similar to how we play in getting it off the goalie and trying to play out from the back. In the past they have gone more direct early.

"I enjoyed it. I thought it was a tremendous derby. I'm sure the neutrals enjoyed watching it and it was great to play in as well. It was two good teams going right at it. Both teams were trying to win it and that's what everyone wants to see.

"Both teams tried to play but everyone knows that nice, attractive passing football goes out of the window in derbies. It was high tempo, we tried to get the ball forward as quickly as we could and make things happen in the opposition box.

"We came here to win the game, but at 3-2 we would obviously have settled for a point. It was very important that we didn't lose the game. It would have been a very long week waiting for the Hull game without Daniel's equaliser.

"When you look back we could have lost but I'm sure the Everton players are thinking the same. With Joe Allen's chance, Luis Suarez's chance, it could have been 5-5. It was an exciting derby that I'm sure will be getting replayed on the TV for many years.

"From a player's point of view I think we go away from here with a lot of positives but also a lot of negatives.

"When you score three but concede three your feelings are a bit mixed when you're trying to analyse the game. But we're certainly happy with a point the way the game panned out. It keeps Everton away from us."

Luis Suarez's stunning free-kick in the first half and Sturridge's header increased the strike duo's respective tallies in the Barclays Premier League to nine apiece.

Gerrard added: "Daniel has obviously been carrying a bit of a niggle of late but the manager said in his team-talk that he could probably come on and be the match-winner or play a very important part coming off the bench.

"As for Luis, he's a machine. He's right up there with the best in the world. Luis is the type of player who won't be thinking about his free-kick after the game, he'll be thinking about the header he missed. That's why he's so good.

"He'll be desperate to get back out and make amends for that. That's what the best players do. They don't get big-headed over the good things they do but analyse the mistakes, where it went wrong and how they can improve."